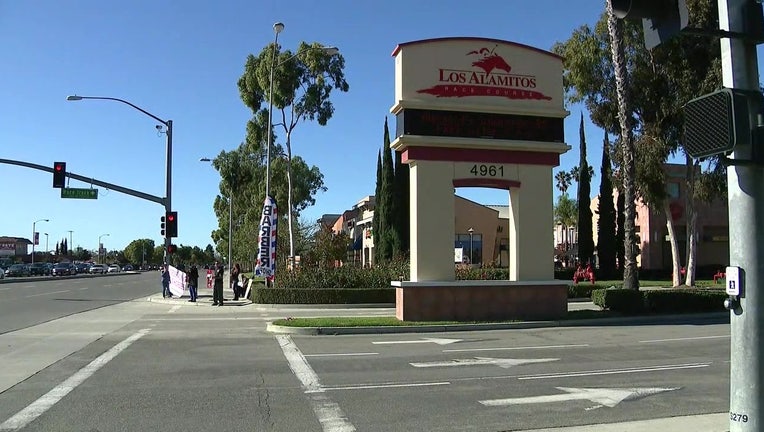 LOS ALAMITOS, Calif. - Another horse has died after suffering a racing injury at Los Alamitos Race Course, two days after the track was placed on probation by state regulators and ordered to produce a plan to address a recent rash of racehorse deaths.

Tacy, a 5-year-old mare, was leading Sunday night's fifth race when she was pulled up by jockey Christian M. Aragon and vanned off. She was later euthanized, officials confirmed Monday.

The Cypress track was placed on probation Friday by state regulators after a recent rash of racehorse deaths. At least 20 horses have died after suffering racing or training injuries this year, while another 10 succumbed to gastrointestinal and other types of illnesses.

"Three has to be a thorough review" of why the horses died, said Gregory L. Ferraro, chairman of the California Horse Racing Board. "I think there is a culture there with the veterinarians and trainers pushing the envelope."

The chairman said Los Alamitos must come up with a "feasible plan" to address the issues related to the fatalities by a July 20 meeting.

"If they don't come up with a plan in 10 days, we're putting them on notice that we will suspend their license," Ferraro said.

The day after the CHRB ruling, Alltime Favorite, a 2-year-old gelding, was vanned off after suffering an injury in Saturday night's sixth race, in which he finished fifth. He was being evaluated for possible surgery, a Los Alamitos spokesman said on Sunday. No further information was available about his condition.

Dr. Rebecca Fitzgerald, who checks all of the horses at the track before and after the races, said she could not explain what caused the rash of fatalities.

"The horses in the cluster recently were not on any radar or suspicious in any way," Fitzgerald said Friday. "They were not on a course I was worried about."