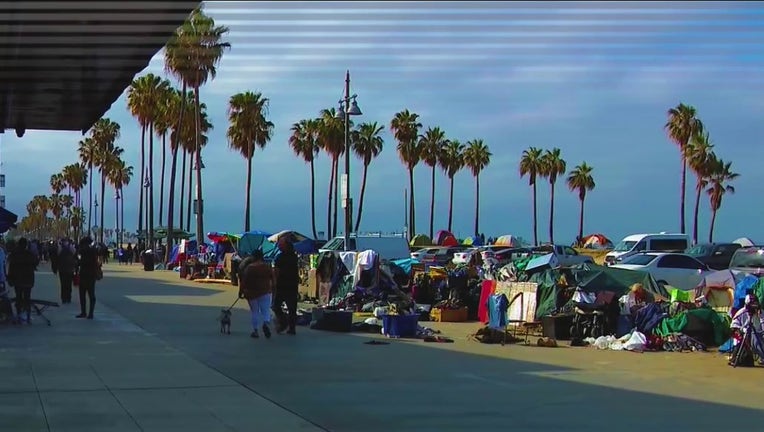 LOS ANGELES - A homeless advocate who has documented the unhoused residents Venice for more than two decades was attacked by a homeless person Wednesday while filming, he told FOX News.

Tony Vera Echevarria, 62, said he was at the beach to live-stream sanitation workers cleaning the area along the Venice boardwalk.

He was filming the trash trucks as they were leaving and some people giving out food to the homeless from about 100 feet away, he said. A homeless woman demanded him to stop and accused him of "stealing her information," prompting her boyfriend to attack, Echevarria said.

"Keep in mind, I'm on their side," he told FOX News. "The guy went behind me and attacked me violently. So I maced him and then he went after another guy, a mentally ill guy. The whole thing was ugly."

In a video of the incident posted online, a woman is seen following Echevarria as he's filming. The footage then switches to him being attacked by a man who is demanding his phone.

Someone filming the incident warns the alleged attacker to stop or else he could face jail time.

"I would like to go to jail. I live outside," he replies.

Echevarria, a Venice resident and native New Yorker, is seen kicking the attacker in an effort to get him to stop. He said he pulled a leg muscle and the authorities were called. Los Angeles police officers responded to the scene and placed the man in handcuffs.

"That's why I maced you dude," Echevarria tells the man as he's being detained. "You don't put your hands on nobody. I'm on your side."

In the end, Echevarria decided not to press charges, saying: "I figured the guy has enough problems."

The Los Angeles Police Department said it had no record of any arrest stemming from the incident.

The attack occurred near the Cadillac Hotel on the famous Venice boardwalk, Echevarria said. Earlier this year, the hotel began participating in Project Roomkey, a program to house homeless people at risk of serious illness from COVID-19.

Echevarria has documented the area homeless population for more than two decades and advocates for those who want help, he said.

"I'm not trying to defend all of them but I get pissed off when people say all the homeless are the same," he said. "They're not all the same."

"It left me with a bad taste in my mouth though," he added. "I'm not making any money off this. "Like ‘What am I doing? I’m trying to help these people.'"

Los Angeles' new sweeping ordinance to restrict sleeping and homeless encampments in certain areas of the city went into effect Friday, but only accessibility obstructions will be enforced until the city approves its accompanying Street Engagement Strategy.

He primarily makes a living filming arrests at the Los Angeles International Airport, during which he was allegedly assaulted by Mike Tyson while snapping images of the former heavyweight boxer and his family.

Wednesday's experience has deterred him. He plans to keep documenting the homeless crisis no matter the risks.

"I got beat up by Mike Tyson," Echevarria said. "We're friends now. I sued him and I won. But that didn't stop me."