Fans flocked to Betty White's Hall of Fame star in Hollywood to celebrate the iconic actress and comedian.

HOLLYWOOD - Hollywood is remembering Betty White Friday. The legendary "Golden Girls" actress died at the age of 99, according to her agent. She was just 17 days from her 100th birthday.

Fans began gathering at the Hollywood Walk of Fame shortly after the news broke Friday afternoon. Many placed flowers, and stuffed animals. White herself was a known animal activist. 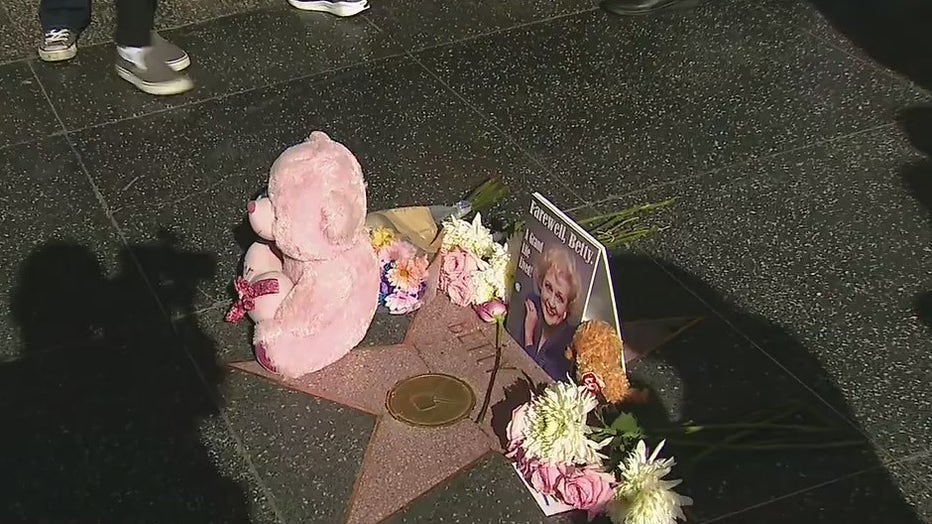 An official memorial will be placed later this afternoon at 4 p.m. to honor White. White's star was one of the original 1,558 fixtures on the Walk of Fame when construction was completed in 1961. Her star is located at the intersection of Hollywood Boulevard and N McCadden Place.

According to the Los Angeles Police Department, officers responded to her house in Brentwood around 9:30 Friday morning. An initial investigation shows that the 99-year-old died of natural causes.

White won five Primetime Emmy's throughout her 80-year career, including two for "The Mary Tyler Moore Show" and one for "Golden Girls."

Fans went to pay their respects Friday at Betty White's star on the Hollywood Walk of Fame. The legendary actress died at the age of 99 Friday, just 17 days before her 100th birthday.