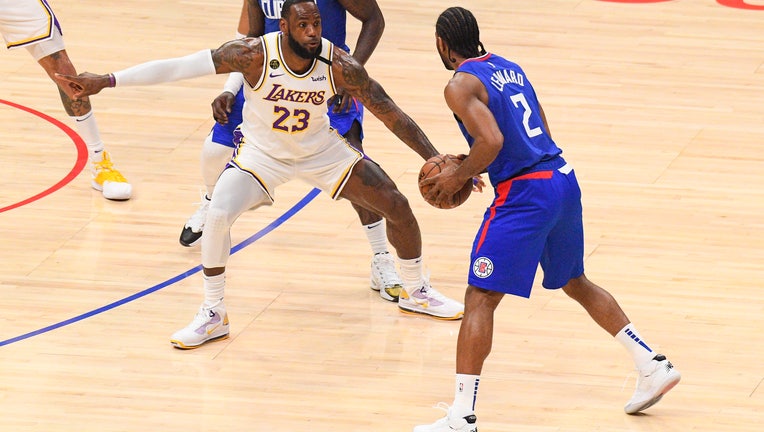 LOS ANGELES - The highly anticipated matchup between the Los Angeles Lakers and Los Angeles Clippers is scheduled Thursday as the NBA officially resumes its season.

Both LA teams will resume their coronavirus-interrupted seasons Thursday night, facing each other at the ESPN Wide World of Sports Complex, inside what has become known as the "NBA Bubble."

The game between the Lakers and Clippers  will be the second of what the league has dubbed "seeding games." The first will be between the Utah Jazz and New Orleans Pelicans, featuring the dynamic NBA rookie, Zion Williamson.

The restart to the season is being conducted amid what the NBA describes as "stringent health and safety protocols." The league is using the Walt Disney World Resort near Orlando, Florida as a single site for a campus for all games, practices and housing for the remainder of the season.

Of the more than 340 players tested for COVID-19 since arriving at the Walt Disney World Resort, two returned confirmed positive tests while in quarantine, according to the league. Those players never cleared quarantine and left the campus to isolate at home or in isolation housing.

There have been no returned confirmed positive tests in the sets of results announced July 20 and Tuesday.

If a player on the campus returns a confirmed positive test in the future, he will be isolated until being cleared for leaving isolation under the rules established by the NBA and the Players Association.

The NBA and NBPA have agreed the goal of the season restart "will be to find tangible and sustainable ways to address racial inequality across the country."

Leaders from the NBA and the NBPA have discussed strategies to increase Black representation across the NBA and its teams, ensure greater inclusion of Black-owned and operated businesses across NBA business activities and form an NBA foundation to expand educational and economic development opportunities across the Black community.

Additional details will be released later.

"Black Lives Matter" has been painted on the courts of the three arenas that will be used during the restart. Players have been allowed to put league-approved social justice messages on the backs of their jerseys along with their names.

The Morrises are twins. The Greens are not related.

The 22 teams participating in the restart are the 16 (eight per conference) in current playoff positions and the six teams six games or fewer behind the eighth seed in their respective conference.

Eight teams did not meet the criteria to participate.

Each participating team will play eight "seeding games," as selected from its remaining regular-season matchups. The seeding games will continue through Aug. 14.

At the conclusion of the seeding games, the seven teams in each conference with the highest combined winning percentages across regular-season games and seeding games will be the first through seventh seeds for the NBA Playoffs for that conference.

The Lakers enter the seeding games with the best record in the Western Conference, 49-14, and second best in the league behind the Milwaukee Bucks, who have a 53-12 record.

The Clippers have the second-best record in the Western Conference and fourth-best in the league, 44-20.

The teams were supposed to meet on Jan. 28, but the game was postponed by the NBA "out of respect for the Lakers organization" because of the deaths of retired Lakers star Kobe Bryant, his daughter Gianna and seven other people in a helicopter crash two days earlier.

The game was rescheduled for April 9 but was not played as the league, responding to the coronavirus pandemic, suspended further play following the conclusion of play on March 11.

Williams will miss the game because of a 10-day quarantine ordered by the NBA that began Saturday. He received permission to leave the campus to go to Atlanta to attend the viewing for a close family friend who died. While in Atlanta, Williams had dinner at a strip club.

Williams would have had a four-day quarantine if he did not go to the strip club. The quarantine will also cause him to miss Saturday's game against New Orleans.

Williams is third in the Clippers in scoring, averaging 18.7 points per game, despite only making eight starts in 60 appearances.

Lakers starting forward Anthony Davis is listed as questionable because of an eye injury suffered in Saturday's scrimmage when he was inadvertently poked in the right eye by Orlando Magic guard Michael Carter-Williams. Davis told reporters Wednesday he would play Thursday.

The Lakers will be without guard Rajon Rondo who sustained a fracture to his right thumb during practice July 12 and underwent surgery to repair the fracture July 15. He is expected to return to full basketball activities in early-to-mid-September, according to the team.

The Lakers made one addition to their roster since play was suspended, signing Smith, a 34-year-old 6-foot-6-inch guard who hasn't played in an NBA game since Nov. 19, 2018.

Like most sporting events around the world, fans will be barred from attending games during the restart because of the coronavirus pandemic. However, more than 300 fans each game will be invited to appear live on 17-foot video boards surrounding the court.

Those fans will have the opportunity to digitally interact with each other throughout the game using Microsoft's "Together mode" to create a virtual experience by removing fans from their individual backgrounds and bringing them together in a shared visual space that will be seen through the broadcast and in the venue.

The telecasts of the games during the restart will include broadcast enhancements.

Broadcasters will use more than 30 cameras, including many in robotic form. They will be repositioned closer to the court and showcase never-before-seen camera angles in places that are otherwise not accessible with fans in the arena, according to the NBA.

Microphones around the court will capture enhanced sounds from the floor, including sneaker squeaks and ball bounces.  DJs and announcers will be in-venue to help replicate the sounds and experiences teams are accustomed to in-arena.