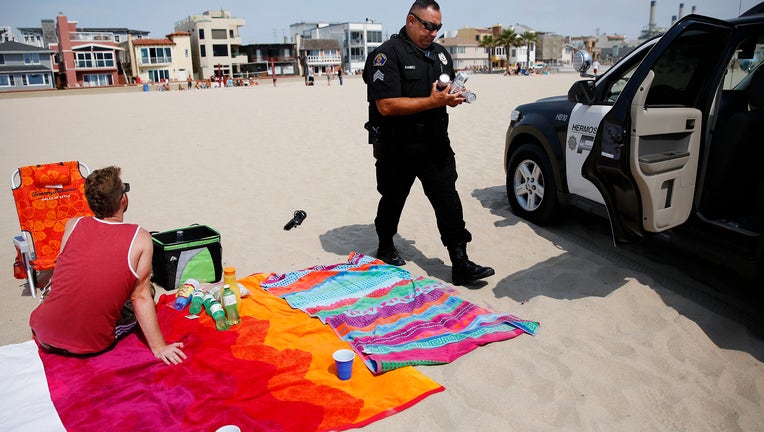 FILE PHOTO -- Sgt. Jaime Ramirez with the Hermosa Beach Police Department confiscates beers and a bottle of vodka after issuing tickets to a couple of beach goers, while patrolling the weekend before the July 4th holiday, June 29, 2013. (Photo by Jay

"With the lifting of most COVID-19 restrictions, the City of Hermosa Beach is expecting large crowds over the Fourth of July weekend," Hermosa Beach police Chief Paul Lebaron and City Manager Suja Lowenthal said in a joint "letter to the community" that was released Monday morning. "As always, the Hermosa Beach Police Department is committed to ensuring your safety and security, and it will have an increased presence in the community over the Fourth of July weekend."

"HBPD personnel will be assigned throughout the city to address the annual influx of people celebrating the holiday weekend in Hermosa Beach," the letter reads. "In past years, our efforts have reduced incidents of disturbing the peace within our community, ensuring safe and memorable Independence Day celebrations in Hermosa Beach."

The officials noted that all fireworks are illegal in the city and wrote: "Please leave the fireworks to the professionals, who will be staging fireworks shows in some of our neighboring cities on July 4."

They also warned property owners and residents of their obligations if they host a party, with the following guidelines:

Also, at parties where underage drinking occurs, the city's "social host ordinance" holds either the parents accountable or whomever is the responsible person at the residence that hosts the party. The ordinance imposes fines of $2,500 for a first offense, $5,000 for a second offense and $10,000 for a third offense.

Fines could also be imposed on owners of properties that are the site of more than one police response during the holiday.

"Throughout the July 4 holiday, Hermosa Beach police will invoke a city code that could place a sizable financial assessment against property owners -- whether or not they are present at the time the police arrive," the letter warns. "If police receive complaints about noise or other problems that result in more than one response to the property, they may charge the property owner for the cost of that or successive police/emergency responses."