LOS ANGELES - The Golden State Killer will hear testimonials from his many of the women he raped, beginning Tuesday and through Thursday when Orange County's victims will have their say.

Victim impact statements in the sentencing for Joseph James DeAngelo Jr., 74, begin Tuesday with his many rape victims when he was known as the Visalia Ransacker and then later as the East Area Rapist and Original Night Stalker.

DeAngelo admitted his guilt June 29 in a string of murders, rapes and other crimes in the 1970s and 1980s, stretching from Sacramento County to Orange County. He pleaded guilty to 13 counts of first-degree murder and murder during the commission of rape, robbery and burglary, 13 counts of kidnapping to commit robbery with sentencing enhancements for the use of a gun and a knife. 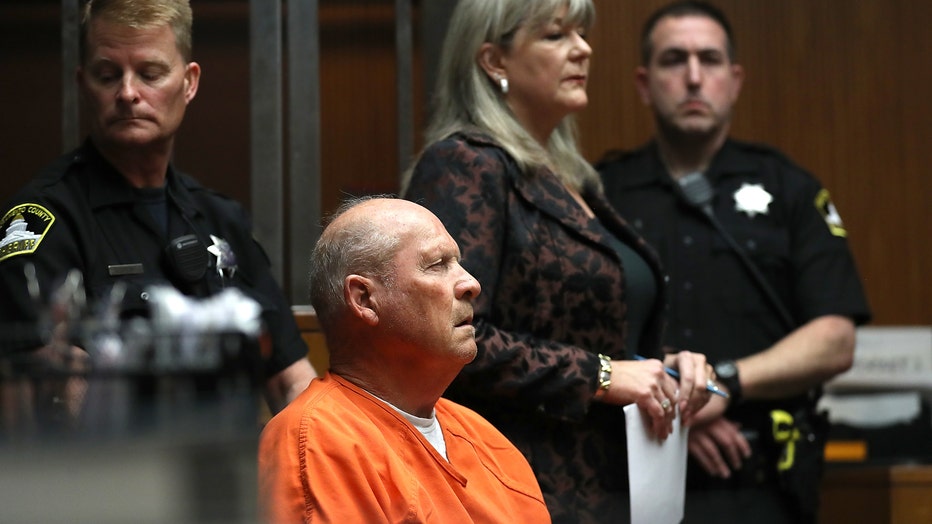 DeAngelo also admitted in his plea deal to crimes prosecutors could no longer charge him with because of a statute of limitations such as attempted murder, kidnapping to commit robbery, rape, robbery, first-degree burglary, false imprisonment and criminal threats.

On Friday morning, DeAngelo is expected to be formally given a sentence of life in prison without the possibility of parole.

On Thursday afternoon, DeAngelo's Orange County victims are expected to be the last to have their say.

On the day of DeAngelo's plea bargain, Harrington's brother, Ron Harrington, said it was a "totally surreal experience" to hear the killer admit his crimes.

Ron Harrington said he and his family still support the death penalty for DeAngelo, but believe the plea deal is the best form of justice they could get.

"This is the most amount of justice and most amount of closure we could ever obtain," Ron Harrington said. "This guy is absolutely the worst of the worst... He is truly the poster child for the death penalty."

But Ron Harrington understood that it was the best they could get given the COVID-19 pandemic, which made it difficult to pull off a preliminary hearing, as well as the problems with relying on elderly witnesses and investigators taking the stand decades after the killings.

The Harringtons, who lived in a single-story home in the gated Niguel Shores community, were attacked in their bedroom, according to Investigator Larry Pool of the Golden State Killer task force. Their bodies were found on their blood-spattered bed with ligature marks on their wrists and Patrice's ankles, Pool wrote in a probable cause declaration.

Keith Harrington was a medical student and Patrice a pediatric trauma nurse, according to Orange County District Attorney Todd Spitzer, who said DeAngelo bludgeoned the couple to death and left the binds on the bed.

"They were newlyweds, having been married only three months," Spitzer said, noting that Keith's father, Roger, found the bodies.

Investigators in 1996 matched semen at the crime scene to the killer in the two other Orange County cases. The identity of the killer remained unknown until 2018, when investigators used a public genealogy database with DNA recovered from an item discarded by DeAngelo.

Witthuhn was attacked between 11 p.m. on Feb. 5, 1981, and 2 a.m. on Feb. 6, 1981. The cause of death was skull fractures from a beating, Pool said, adding that her parents discovered her body in a sleeping bag when they went to check on her. There was no evidence of a struggle and she had ligature marks on her wrists and on her right ankle.

Witthuhn's husband, David, had been admitted to an area hospital due to a stomach virus, so she was alone for the night, Spitzer said. After she visited him at the hospital, her spouse called her to make sure she arrived home safely.

"That was the last time he spoke with her," Spitzer said as he took DeAngeleo's guilty plea on June 29.

Witthuhn slept in a sleeping bag because she felt cold without her husband there and was eagerly awaiting his planned release from the hospital the next day, Spitzer said.

DeAngelo took the bindings, along with jewelry, a lamp and a cassette from an answering machine, Spitzer said.

Cruz was killed about 5 p.m. on May 5, 1986, in her bed in her Irvine home. Blood covered her head and neck and she was partially covered by her blanket.

Cruz had hemorrhaging in her eyes and bruises on the bridge of her nose, according to Pool, who said the killer knocked out three of her teeth -- with two found in her hair.

Cruz had no ligature marks on her wrists like the other victims, but there were abrasions, leading investigators to speculate her killer squeezed her wrists so hard he left a mark, Pool said.

Cruz's lower lip was swollen, her tongue bitten. An ultraviolet light spotlighted semen on the victim, according to Pool. No murder weapon was found, but a pipe wrench in the backyard was missing.

The cause of death was "crushing skull fractures," he said.

Cruz's family had gone on vacation to Mexico, leaving her home alone, Spitzer said. One of the victim's male friends visited her because she was afraid to be alone, he said.

"About 11 p.m., prior to his leaving, they heard noises outside the house," Spitzer said. "They attributed the noise to a cat or a washer and dryer."

Spitzer turned to the defendant and said, "You, Mr. DeAngelo, unlawfully entered the Cruz residence... You attacked her, you beat her and you raped her... You murdered her in the first-degree, bludgeoning her multiple times in her face and head."

The victim "swallowed a significant amount of blood," Spitzer said.

Various prosecutors from across the state read detailed descriptions of DeAngelo's crimes, starting with the murder of 45-year-old Claude Snelling on Sept. 11, 1975, in Visalia. DeAngelo shot and killed Snelling as he attempted to rescue his daughter, who the killer was trying to kidnap.

DeAngelo also pleaded guilty to attempting to kill Detective William McGowen on Dec. 10, 1975, as the then-Visalia officer attempted to arrest him for a series of burglaries attributed to the "Visalia Ransacker" from April 1974 through December 1975.

DeAngelo also pleaded guilty to bludgeoning to death Charlene and Lyman Smith, both of Ventura, with a fireplace log on March 13, 1980. Lyman Smith, a 43-year-old former deputy district attorney, and his 33-year-old wife were found dead by his 12-year-old son. The killer also raped Charlene Smith and stole some of her jewelry, prosecutors said.