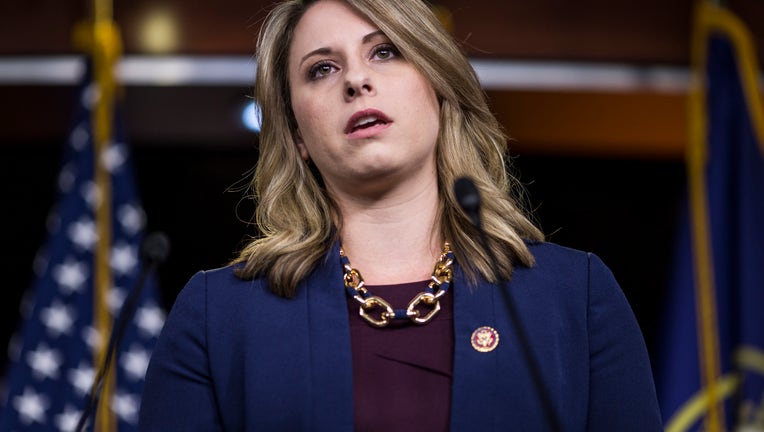 LOS ANGELES - Lawyers for former congresswoman Katie Hill and her ex-husband told a Los Angeles judge Thursday they are in discussions to settle her allegations of harassment and years of abuse, which led her to obtain a temporary restraining order against him in December.

Los Angeles Superior Court Judge Anne Richardson previously ordered Kenneth Heslep to stay at least 100 yards away from Hill, as well as her mother and sister.

A hearing was scheduled today on whether the order should be extended, but lawyers on both sides said they are trying to resolve the issues without the need of a trial. The attorneys estimated a trial could take four hours to two days and involve the testimony of about four witnesses.

In the wake of the announcement, Richardson postponed the hearing until Feb. 24.

The couple officially divorced in October.

Heslep has denied allegations of abusing Hill, a bisexual Democrat who resigned her seat in 2019 after nude photos of her were published and news emerged that she had a three-way relationship with her husband and a campaign staffer. She was also accused of having an affair with a member of her congressional staff.

The 33-year-old blamed her husband for the public release of the photos. Speaking in Congress in 2019, she decried a "misogynistic culture that gleefully consumed my naked pictures, capitalized on my sexuality and enabled my abusive ex to continue that abuse, this time with the entire country watching."

The seat had long been held by Republicans until Hill's 2018 victory over then-Rep. Steve Knight, R-Palmdale. After Hill's resignation, Republican Rep. Mike Garcia defeated Democratic Assemblywoman Christy Smith in a May 12 special election to fill the final 7 1/2 months of the term. Garcia then beat Smith again by a razor-thin margin in November's election for a full two-year term.