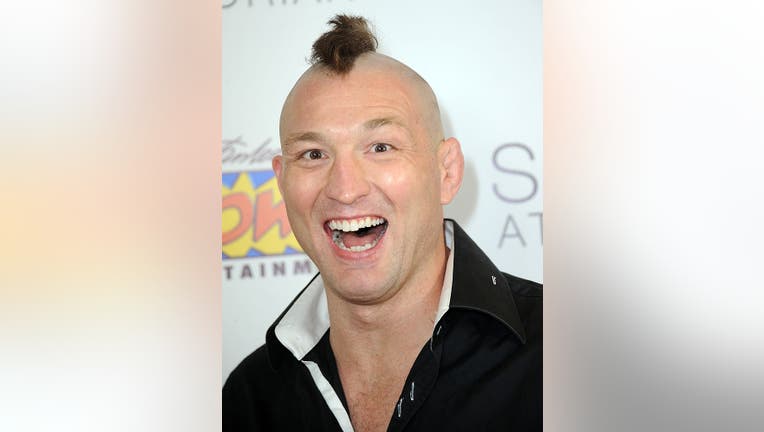 SANTA ANA, Calif. - Former mixed martial arts fighter Jason "Mayhem" Miller, who has a lengthy criminal record, was charged Tuesday with committing a residential burglary and car theft in Irvine while on probation in a domestic violence case.

Miller, 39, pleaded not guilty this afternoon to one felony count each of first-degree burglary, unlawful taking of a vehicle and grand theft auto. He's being held without bail pending a Sept. 2 pretrial hearing at the Harbor Justice Center in Newport Beach.

Miller, who was arrested at 6:24 p.m. Friday at 3301 Loop Road, knew his alleged victim, who was not identified, said Irvine police Sgt. KarieDavies.   Miller pleaded guilty on July 18, 2019, to felony vandalism and misdemeanor violation of a protective stay-away order and was sentenced to a year in jail and placed on three years probation.

In that case, he smashed a large marble table at his girlfriend's La Habra residence while also punching holes in and removing doors from the home and derailing the garage door.

Miller pleaded guilty to beating the same girlfriend in September 2017and was sentenced two months later to 124 days in jail and released with credit for time served, according to court records.

Miller was arrested again on Jan. 11, 2018, when he was found to be in possession of a bulletproof vest and various other weapons such as nunchucks, various knives, a machete, an axe, a samurai sword and replica assault weapons, according to a probation officer's report.

Miller, whose progress on probation was previously characterized as"limited and disappointing" by the probation officer, dropped out of a drug and alcohol recovery program.

On Sept. 23, 2018, he tested positive for the ingredient in marijuana and various opioids, according to court records.

When Miller resolved a litany of legal troubles in 2017, prosecutors said he could face up to 21 years in prison if he ran afoul of the law again.

When he accepted a plea bargain from Orange County Superior Court Judge Robert Fitzgerald in April of that year, he said he was committed to clearing probation.

"I'm going to fly right," Miller told reporters then.   At the time, Miller said his repeated contacts with law enforcement started after he was accused of domestic violence by an ex-girlfriend.

Shortly after the allegations surfaced, he lost his job as an analyst with Fox Sports and couldn't get any more fights.   "My entire life turned into a crisis," Miller told reporters in 2017.

Fitzgerald sentenced him to 100 days in jail, but since he had already accrued credit for time served he did not have to spend any more time in custody.

Miller was acquitted on Feb. 1, 2017, of beating up the former girlfriend, but other charges involving his conflicts with law enforcement were set aside at the time for a separate trial.

In one conflict with Orange County sheriff's deputies, he was "live-tweeting" the encounter as they tried to serve him with an arrest warrant at his Mission Viejo home in October 2014.

In July 2016, he got into an argument with two women, one of whom slapped him, at the Saddle Ranch Chop House in the Triangle Square shopping center in Costa Mesa.

The heavily intoxicated Miller, who grabbed the woman who slapped him by the leg, was detained by a security guard at the restaurant until police arrived, police said.   In January 2016, Miller spray-painted graffiti on a wall of a now-shuttered tattoo parlor in Lake Forest.

That same month, he cranked up the volume of a stereo in the same tattoo parlor, blowing out the speakers, prosecutors said.

In October 2015, he hurled a ceramic tile at deputies and threatened them with a large fire extinguisher and metal police and had to be subdued with a Taser.

In March 2015, he kicked a police officer and spit at another cop atthe White House restaurant in Laguna Beach, prosecutors said.