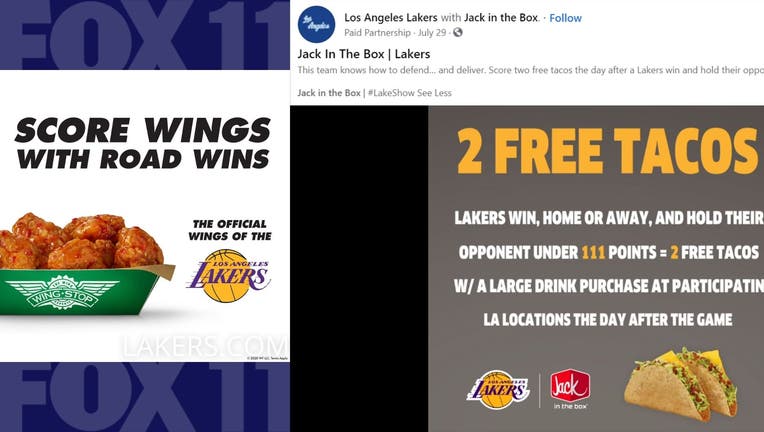 LOS ANGELES - Laker Nation won't be able to catch NBA games at Staples Center anytime soon but the team is keeping some of their food promotions for fans cheering from home.

Following the Los Angeles Lakers' 127-91 win over the Minnesota Timberwolves on Sunday, fans can score two free tacos with a purchase of a large drink at participating Los Angeles Jack in the Box locations the day after the game.

According to the Lakers, if the team wins and hold their opponent under 111 points, fans can score two tacos with their order the day after the game.

Another food promotion fans can look forward to from home or as they watch on their streaming devices is Wingstop's "Road Wins" promotion. If the Lakers win on the road or beat the opposing team at home on Sundays, fans can get five free boneless wings with any wing purchase at SoCal Wingstop locations.

You can click here for more information on the Wingstop promotion.

As of Sunday, December 27, games at Staples Center are still closed to fans due to coronavirus concerns.