The law already protects the public right of way within 500 feet of a "sensitive" facility such as schools, day care facilities, parks and libraries, but only if each specific location is designated by the council for enforcement.

LOS ANGELES - The Los Angeles City Council Wednesday delayed until next week a final vote on an ordinance that would ban homeless encampments within 500 feet of schools and daycare centers. 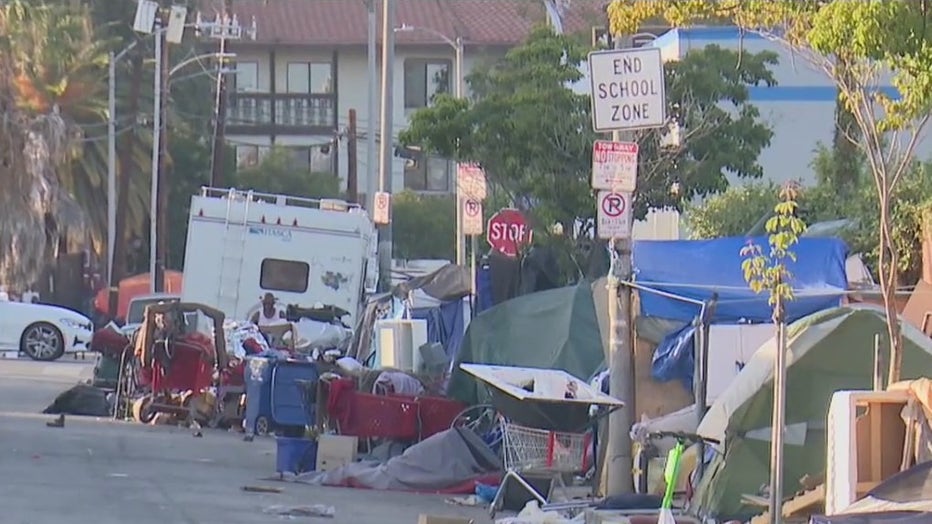 The council voted 10-1 in favor of the ordinance earlier this month, with Councilman Mike Bonin dissenting. Since the vote was not unanimous, the matter requires a second vote. The issue was on the agenda Wednesday -- the council's first meeting since its summer recess -- but the vote was reset for next Tuesday.

Despite the vote being delayed, several members of the public spoke in opposition to the proposed ordinance Wednesday, and homeless advocates gathered outside City Hall to protest before the meeting.

The ordinance is an amendment to the city's sweeping law regulating the location of homeless encampments. Municipal Code 41.18 prohibits sitting, sleeping, lying or otherwise obstructing the public right of way in several areas of the city.

Those areas include within 2 feet of any fire hydrant or fire plug; within 5 feet of any operational or utilizable entrance or exit; within 10 feet of a loading dock or driveway; in a manner that interferes with any activity for which the city has issued a permit or restricts accessible passage as required by the Americans with Disabilities Act; or anywhere within a street, including bike paths.

The law already protects the public right of way within 500 feet of "sensitive" facilities such as schools, day care facilities, parks and libraries -- but only if each specific location is designated by the council for enforcement.

The amendment given tentative approval July 1, and approved previously by the council's Homelessness and Poverty Committee, is a blanket ban on encampments within 500 feet of all schools.

Councilman Joe Buscaino proposed the idea of an encampment ban near schools last year, but it never gained traction. The issue was revived earlier this year, in part due to the urging of Los Angeles Unified School District Superintendent Alberto Carvalho, who said teachers, principals and parents have expressed concerns about homeless encampments near campuses.

"I've seen elementary schools with conditions that none of us as parents would find acceptable for children. Individuals with mental illness, some of them absolutely unclothed, shouting profanities in the listening ear of children," Carvalho told the council previously.

Buscaino, who sits on the Homelessness and Poverty Committee, said approving the amendment will "ensure the most sacred places among us, our playgrounds and schools, are safe."

The city ordinance already in place also prohibits encampments and sleeping within:

The ordinance also allows the city to prevent encampments for a period of no longer than one year in areas that are deemed an ongoing threat to public health or safety, including due to: