Families question suspected fentanyl deaths of loved ones behind bars

FOX 11 investigates allegations of fentanyl behind bars. More than a dozen inmates have died in Riverside County jails, prompting families of the deceased inmates to question their alleged overdose deaths. Chad Bianco, who is at the center of scrutiny from those families, slammed rumors accusing the Riverside County Sheriff of being responsible for the suspected overdoses.

RIVERSIDE COUNTY, Calif. - Fifteen inmates have died in Riverside County jails in 2022, making it the deadliest year on record. Sheriff's deputies are blaming fentanyl overdoses for at least a third of those deaths, but some relatives of the deceased are blaming the sheriff himself.

The death breakdown includes two homicides, two suicides, one accident, five deaths from natural causes and, the statistic getting a lot of attention — five fentanyl-related overdoses.

One of those fentanyl deaths is Michael Anthony Vasquez, who was found passed out in his cell on May 26. He had been in custody for six days after an attempted vehicle burglary. "How does that happen," asked his mother, Kathy Nigro who says her 20-year-old son would never have taken fentanyl knowingly. She said that the deputy who notified her of his death explained there was a white powdery substance on Vasquez’s body and that they tried to revive him, but couldn't. 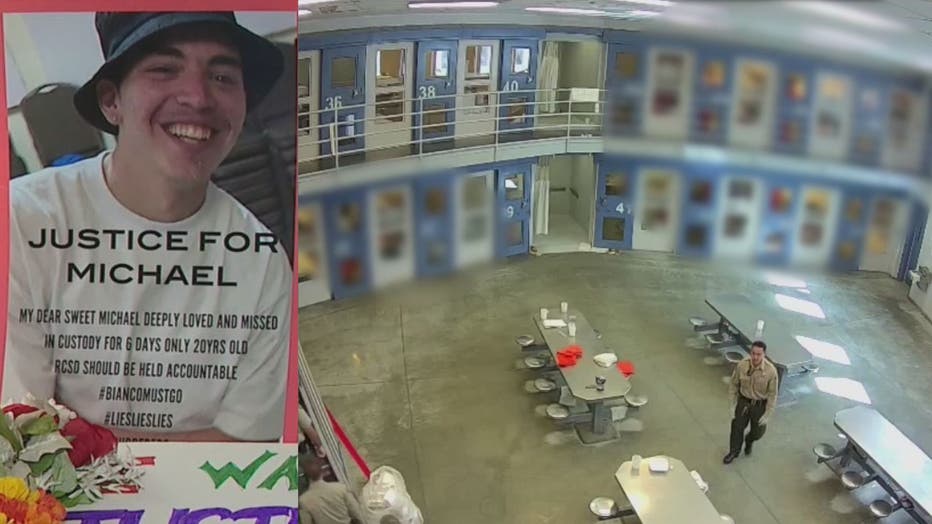 With 15 deaths in custody this year, 2022 has been the deadliest year on record in Riverside County jails. (FOX 11)

SUGGESTED: 'Devastating' fentanyl: A look inside a DEA testing lab

"I spoke to my son two hours before he died, he was fine," said Lisa Matus, whose 29-year-old son Richard Matus Jr. had been in custody since 2018, awaiting trial for his alleged part in a dispensary robbery.

"He wouldn’t even drink the alcohol they make in prison," said his mother. "If the Sheriff wants to say he overdosed, he might as well be investigating a murder."

"We are investigating each one of those deaths," said Bianco, but he admitted the department has a serious problem with fentanyl getting into the jails. Drugs in prison have always been an issue, but fentanyl poses unique complications.

Our crew was allowed access to the Robert Presley Detention Center in downtown Riverside, home to approximately 800 prisoners, many of them, like Matus Jr. and Vasquez, pre-trial detainees. In efforts to find illegal drugs in the centers, deputies have performed cell checks without warning; dogs have been recruited to detect left over traces of fentanyl; and inmates have been subjected to scans.

Fentanyl crisis: A look inside a SoCal DEA lab

The Drug Enforcement Agency gives FOX 11 an exclusive look inside a Southern California lab, where seized drugs are tested.

"But with fentanyl," echoed every deputy we spoke to, "there are unique challenges." The amount needed to get high is very small, so it’s very easy to hide. It also takes very little to overdose, and without applications of NarCan within the first minutes or so, death is very likely. Deputies carry it with them, and stations full of the nasal spray delivery NarCan are all over the jail.

"We have lost five, but we have saved dozens of inmates" explained Bianco, to which the attorney representing some of the families responded unequivocally — "We suspect foul play and intend to prove it."

Denisse Gastelum claims Sheriff Bianco is trying to cover up the situation by not reporting the deaths to the California Department of Justice in a timely manner. Coroner reports have been sealed, pending lengthy investigations. Families have not been allowed to see the bodies of their loved ones until they are released by the Coroner's office — which Biano heads — to mortuaries, which has taken weeks in at least one case.

"We are trying to investigate the deaths" said Bianco, "and that takes time." The families said they want to see if there is bruising or signs of foul play, to which Biano responded, "So do we. Our coroner is not equipped for people to visit, it just doesn’t happen."

Perhaps what angers the families most, though, is what Bianco described as the type of honesty that "can get me in trouble." He has been vocal about the need for people to take responsibility.

"If they weren’t taking the drugs, they wouldn’t be dying," he said, adding that, "as a father, though, I can understand how painful this is for the families."

Beyond painful, is how those we spoke to, described it. Vasquez’s family explained that Michael Vazquez had made mistakes but said they were hoping he’d get help in jail.

"Over the weekend, when he was arrested, he asked if I was going to bail him out," said his mother. "But I figured maybe I’d let him sit there for a couple of days, get help, counseling, learn a lesson, and now I keep beating myself up over it, but also wondering how can this happen in a supposedly secure facility."

The families, their attorneys, and the ACLU are demanding an independent investigation from the attorney general.

"Sheriff Bianco either doesn’t have the means, or perhaps the willingness, to check his correctional officers and control the situation," said Gastelum, predicting that "by the time we are done, mark my words, there will be a federal decree overseeing the Riverside County Sheriff's Department."