LOS ANGELES - A former Angels employee facing trial in connection with the 2019 fatal overdose of pitcher Tyler Skaggs may have also supplied illegal drugs to at least five other Major League players, according to court documents filed by federal prosecutors.

The documents, which were filed Friday, outline the intention of federal prosecutors to present testimony from at least five Major League Baseball players who allege they received oxycodone from former Angels public relations director Eric Kay, according to the Los Angeles Times.

None of the players are named, but the filing states that Kay was providing "controlled substances, including oxycodone," to Angels players since 2017, the Times reported, saying  all five are prepared to testify that Kay was the "singular source" who supplied oxycodone to the players in amounts of  "two to three pills while others would ask for up to 20 pills," according to the Times."

"The evidence will also demonstrate that Kay often coordinated the distribution through text messages or through conversations involving the victim [Skaggs]," the filing said. "This witness testimony will in many instances be corroborated by text message communications. Evidence will also demonstrate that Kay was motivated to obtain these pills because Kay could himself use some of the pills that he obtained for the players. It therefore provides context and background to the distribution at issue in the indictment."

Skaggs, 27, was found dead in his hotel room at the Southlake Town Square Hilton in Southlake, Texas on July 1, 2019. The Angels were staying at the hotel while in town to play the Texas Rangers. 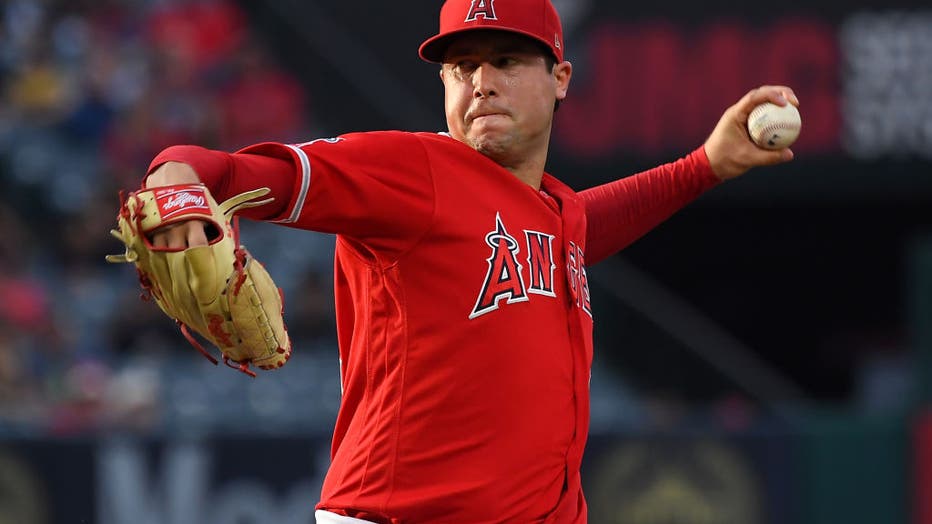 ANAHEIM, CA - JUNE 29: Tyler Skaggs #45 of the Los Angeles Angels pitches in the first inning of the game against the Oakland Athletics at Angel Stadium of Anaheim on June 29, 2019 in Anaheim, California. (Photo by Jayne Kamin-Oncea/Getty Images)

In October 2020, Kay was indicted on two federal counts, alleging he distributed the fentanyl that resulted in the pitcher's death. He has pleaded not guilty.

The Grand Jury indictment also alleged Kay and others who were not named conspired to possess with intent to distribute fentanyl beginning in or before 2017, according to the U.S. Attorney's Office in Dallas.

Kay's trial is set to get underway on Oct. 4 in Fort Worth, Texas.

In June, Skaggs' family filed a wrongful death lawsuit against Kay, the Angels and the team's former vice president of communications, Tim Mead.

The family alleges the Angels "should have known Kay was dealing drugs to players."

The Angels called the allegations "baseless and irresponsible."

The team hired a former federal prosecutor to conduct an internal investigation, which found that no one in team management was aware of "any employee providing opioids to any player."