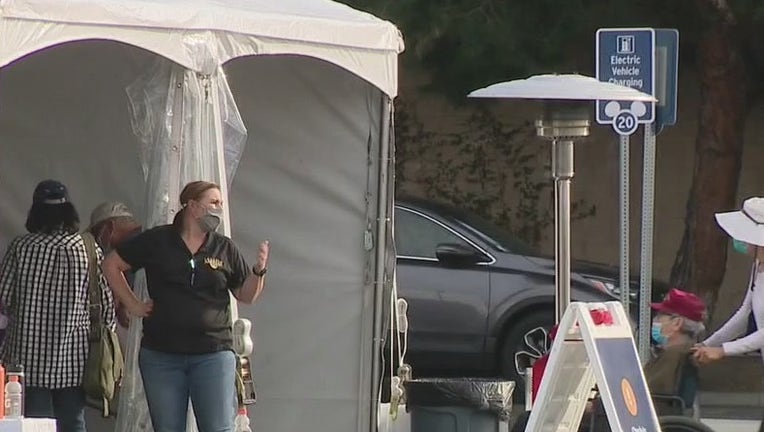 ORANGE COUNTY, Calif. - Orange County's coronavirus vaccine site at Disneyland is expected to reopen Friday, a day after it shut due to brisk Santa Ana winds that were a threat to uproot its tents.

"Unless there's a weather issue, we have enough vaccine to get through what we need to do.''

However, Kim added, "We still need to finish processing all of those due a second dose last week. We're going to prioritize those second doses. We need to catch up.''

The only site that remains closed is the one at Santa Ana College, which will be able to reopen sometime in the middle of next week, Kim said.

Orange County received 83,055 doses of coronavirus vaccines Thursday, helping officials catch up on canceled appointments due to a shortfall in medicine owing to winter storms out east.

"We're basically playing catch-up now,'' Orange County Supervisor Lisa Bartlett said. "But we are on an extremely good trajectory at this point. Our numbers are looking good. ... We may be one of the first counties to go from purple to red tier.''

RELATED: Southern California Vaccine Finder: Where to get your COVID-19 shot

The county received its shipment of 16,000 Moderna vaccine doses a day earlier than expected, Bartlett said.

"We also received last week's Moderna,'' said Orange County CEO Frank Kim. "And we also received this week's Pfizer and Moderna, so we received all of what we were supposed to this week.''

The county also logged 41 more fatalities. There were no deaths logged on Tuesday and Wednesday due to technical issues with the state's reporting system, officials said.

The fatalities are not always reported right away as they come from multiple sources. The fatalities logged on Thursday upped the death toll to 881 in December and 1,214 for January, the deadliest month in the pandemic.

Hospitalizations remained at 515 Thursday, the same as Wednesday, and those in intensive care units rose from 151 to 160.