In addition, the company stated their vaccine provides a durable immune response for at least eight months against the delta variant, which researchers believe to be more transmissible than previously discovered variants.

"Today’s newly announced studies reinforce the ability of the Johnson & Johnson COVID-19 vaccine to help protect the health of people globally," said Paul Stoffels, M.D., Vice Chairman of the Executive Committee and Chief Scientific Officer at Johnson & Johnson. "We believe that our vaccine offers durable protection against COVID-19 and elicits neutralizing activity against the Delta variant. This adds to the robust body of clinical data supporting our single-shot vaccine’s ability to protect against multiple variants of concern."

The preliminary data found that the J&J vaccine provided an "even higher level" of protection against the delta variant compared to "the Beta (B.1.351) variant in South Africa where high efficacy against severe/critical disease was demonstrated," the company said. 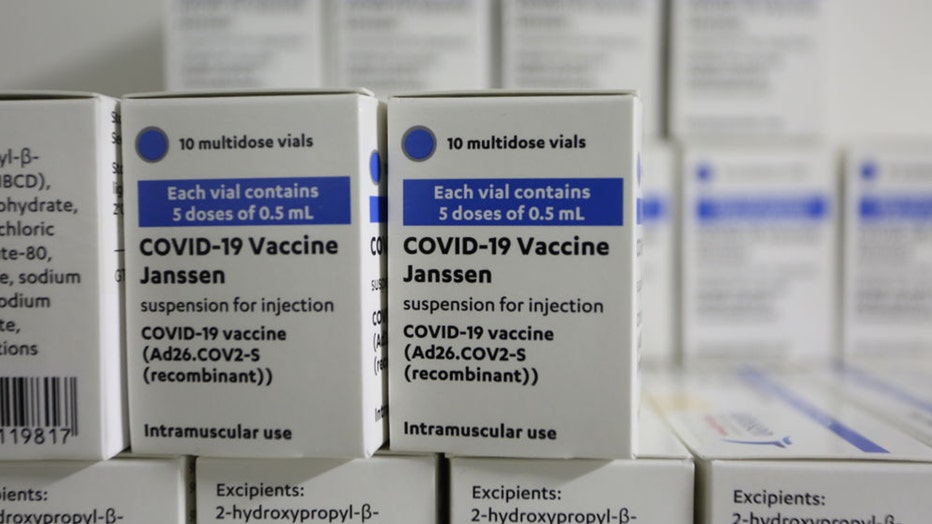 FILE - COVID-19 vaccine from Janssen sits in a freezer.

"Current data for the eight months studied so far show that the single-shot Johnson & Johnson COVID-19 vaccine generates a strong neutralizing antibody response that does not wane; rather, we observe an improvement over time. In addition, we observe a persistent and particularly robust, durable cellular immune response," said Mathai Mammen, M.D., Ph.D., Global Head, Janssen Research & Development, Johnson & Johnson. "With each new dataset, we build on our solid foundation of evidence that our single-shot COVID-19 vaccine plays a critical role in ending the pandemic, which continues to evolve and pose new challenges to global health."

Scientists believe the delta variant, which was first identified in India and has now spread to more than 90 other countries, is about 50% more transmissible than other types and there are early clues that some mutations may ease a key step in how the virus slips inside human cells, said Priyamvada Acharya, a structural biologist at the Duke Human Vaccine Institute.

Still, it’s not clear if higher contagion is the whole reason the variant is spreading so quickly. In Britain, its rise followed a loosening of restrictions in May, when restaurants, gyms and other businesses reopened, and thousands of fans have attended sports events.

As more research is being conducted on the delta variant, scientists are also attempting to figure out if it is just as or more deadly than any other mutations that have become a prominent concern.

British experts have said there are some preliminary signs it may increase hospitalization, but there’s no evidence it is more lethal.

Meanwhile, researchers in the United Kingdom have found two doses of the Pfizer-BioNTech vaccine were only slightly less effective at blocking symptomatic illness from the delta variant than from earlier mutations — and importantly, remain hugely protective at preventing hospitalization.

But just one dose proved far less effective against the delta variant than against earlier versions of the virus.

Experts also noted the Moderna vaccine, the same type as Pfizer’s, should provide ample protection against the delta variant.

Moderna said this week that an analysis of blood samples from people who had received the company’s vaccine showed a strong level of antibodies indicative of robust protection against known variants.

Health officials are urging Americans to get fully vaccinated, whether it’s with a two-dose regimen or one, to prevent further outbreaks of the new variant from taking place.

In the U.S., "we’re still vulnerable for these flare-ups and rebounds," said Dr. Hilary Babcock of Washington University at St. Louis.

The variants "are able to find any gaps in our protection," she said, pointing to how hospital beds and intensive care units in Missouri’s least-vaccinated southwestern counties suddenly are filling — mostly with adults under 40 who never got the shots.

The World Health Organization warned this week that the trifecta of easier-to-spread strains, insufficiently immunized populations and a drop in mask use and other public health measures before the virus is better contained will "delay the end of the pandemic."

The delta variant is positioned to take full advantage of those weaknesses.

"Any suffering or death from COVID-19 is tragic. With vaccines available across the country, the suffering and loss we are now seeing is nearly entirely avoidable," Dr. Rochelle Walensky, director of the Centers for Disease Control and Prevention, said Thursday in urging more Americans to roll up their sleeves ahead of the mutant's spread.