As the delta COVID-19 variant continues to jeopardize progress against rising cases and hospitalizations around the world, the United States is shifting strategy when it comes to persuading unvaccinated Americans to get the shot.

The potent variant that first ravaged India this spring and has now spread in several other countries has hit the U.S. The B.1.617.2 strain already accounts for more than 20% of new COVID-19 infections, doubling in just two weeks, the CDC said last week.

Several countries are now on the defense against the variant, which is considered by government scientists to be between 40% to 80% more transmissible than the previous dominant strain.

In Thailand, a ban on indoor dining and gatherings of more than 20 people was announced, in addition to the closure of construction sites and the sealing off of workers’ quarters in Bangkok and nine other provinces.

Israel reinstated a mask mandate indoors amid a rise in new infections in the past week.

More than 1 million people in Sydney again went into lockdown this weekend as a localized outbreak continued to grow.

And the variant is responsible for 90% of all new infections in the UK, which just recorded the most new coronavirus infections since early February.

Most of the new confirmed cases are among younger age groups which haven’t yet received COVID-19 vaccines. 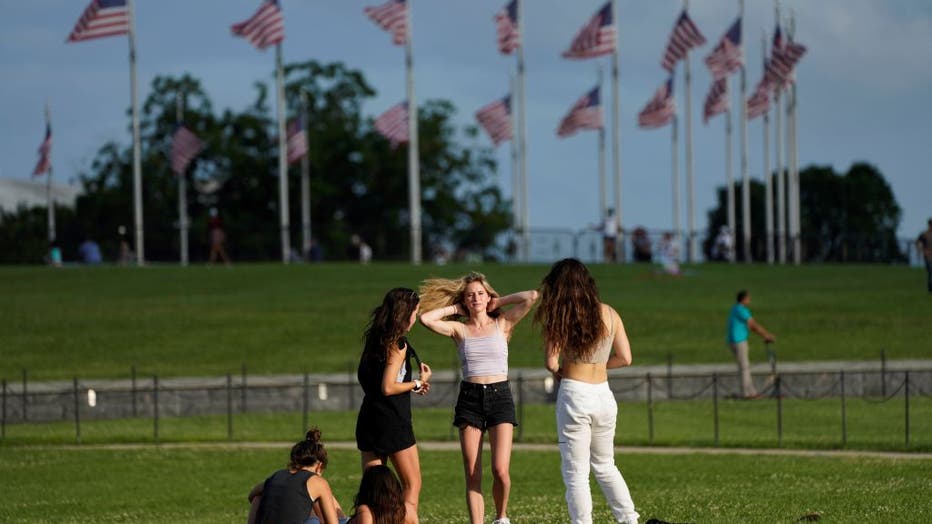 Visitors tour the National Mall in Washington, D.C., the United States, June 26, 2021. The latest 7-day average number of administered vaccine doses per day decreased by 55.3 percent from the previous week, according to a weekly report of the U.S. Ce

Here at home, Americans at highest risk for complications from COVID-19 are overwhelmingly vaccinated, according to CDC data, but only 53% aged 25-39 have received one dose. Among those 18-24, it's 47%.

The Biden administration is now focusing messaging for their trailing vaccination campaign on some 55 million unvaccinated adults, many of them under 30. Seen as persuadable, the group has been dubbed "the movable middle."

Analysts at the Health and Human Services Department have developed a rough sketch of this group. They tend to be younger, mainly 18-29. Most are not college educated, and political independents predominate. Black and Latino adults are more likely to fall in this category than people of other backgrounds.

And the White House has lent its top names to the vaccine push, too.

Doug Emhoff, the husband of Vice President Kamala Harris, has racked up thousands of frequent flyer miles, visiting at least 18 or 19 states by his count.

The administration also has recruited celebrities and athletes, including country music star Brad Paisley and the Tampa Bay Lightning hockey team. It has teamed up with Twitch and Riot Games to reach online gamers and with Panera and Chipotle to offer free food to those getting a shot.

The message, as Surgeon General Vivek Murthy put it: "If you are vaccinated, you are protected. If you are not, the threat of variants is real and growing."

It's unclear how well the levers of persuasion are functioning. Vaccination rates have dropped below 1 million a day, and there's no sign yet of a turnaround.

The administration has acknowledged that it will fall short of its goal of having 70% of adults vaccinated by July Fourth.

At this point, about 170 million American adults have received at least one vaccine dose, representing roughly two-thirds of those 18 and older.

An Associated Press analysis suggests that Biden’s self-imposed goal may not be reached until late July at current rates of vaccination.

Meanwhile, the World Health Organization is pleading for a more equitable distribution of vaccines and for those who have been vaccinated to remain "appropriately cautious" as the variant continues to take over.

"We still live in a world that is only partially vaccinated that has a lot of susceptibility, a lot of vulnerability. What we’re saying is, once you’ve been fully vaccinated, continue to play it safe," said WHO official Dr. Bruce Aylward during the organization’s news briefing on Friday.

Studies have shown that the available vaccines work against variants, including the delta variant.