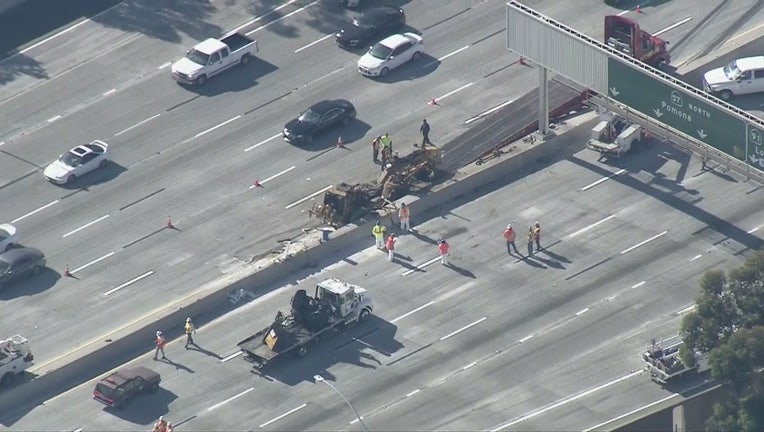 ANAHEIM (CNS) - Motorists were urged to avoid the northbound 57 Freeway in Anaheim today, after a crash involving a truck hauling construction machinery caused a complete shutdown, backing up traffic for miles.

A northbound semi-tractor trailer truck slammed into a center divider and pole at an overpass at 12:08 p.m. on the freeway near Lincoln Avenue, said California Highway Patrol Officer Florentino Olivera.

CHP officers shut down all of the northbound lanes and the high-occupancy and fast lane on the southbound side of the freeway, Olivera said.

"It's probably going to be like this for a few more hours," Olivera said just after 3:45 p.m.

Officers had to close down the freeway lanes to clean up debris, he said. Only the truck was involved in the crash and no one was injured, Olivera said.

Northbound traffic was being diverted onto Lincoln Avenue then north on State College Boulevard to Orangethorpe Avenue, where motorists can re-enter the freeway.

The blockage was also expected to impact traffic for the Los Angeles Angels' 5 p.m. game against the Pittsburgh Pirates.

"Please avoid the northbound 57 freeway if coming to the game this afternoon!" Angels Stadium tweeted at 2:38. "Complete freeway shut down, northbound 57 at Lincoln Ave. Use alternate routes!"