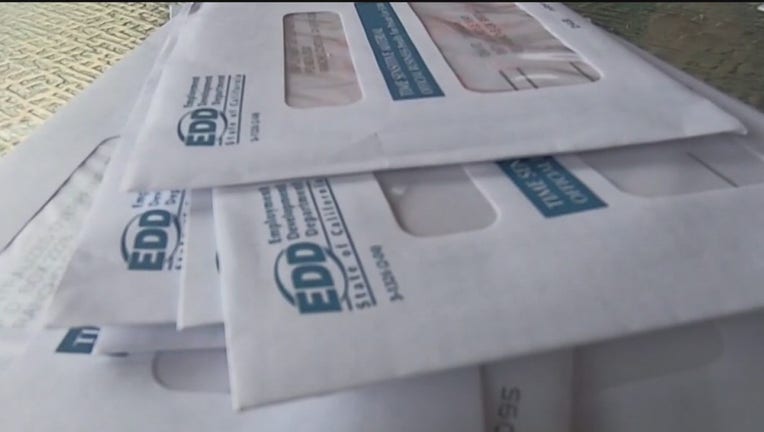 SACRAMENTO, Calif. (AP) -  At least 350,000 debit cards filled with money for unemployment benefits in California have been frozen because of suspected fraud, state officials said, revealing how prevalent the problem has become now that the state has paid more than $105 billion in benefits since March.

The Employment Development Department said the debit cards were frozen for several reasons, including "a high number of claims at a single address." The agency said the claims were part of the federal Pandemic Unemployment Assistance program, which offers unemployment benefits to people who would not normally be eligible to receive them, including independent contractors.

• EDD scams on the rise, dozens arrested in Beverly Hills

Fraud has been a concern at the agency for months as it was hit by an overwhelming number of claims after Gov. Gavin Newsom ordered most businesses to close to slow the spread of the coronavirus. The agency has processed 15.2 million claims since March, or about four times the 3.8 million claims processed in 2010, the worst year of the Great Recession.

More than 1.1 million people are still waiting to receive benefits, a backlog that agency officials say won’t be cleared until January. The agency has had to balance pressure from lawmakers and the public to process claims faster while still taking time to root out fraud.

The fraud appears to be concentrated on PUA claims filed in the state. In one week in August, California had more than 400,000 PUA claims — accounting for more than half of all such claims in the country. Experts said that was a sign of a spike in fraudulent claims because, even though California is the nation’s most populous state, it shouldn’t account for that much of the total.

In Beverly Hills, police have arrested 100 people for fraud and recovered 200 debit cards and more than $500,000 in cash. And in Los Angeles, Fontrell Antonio Baines — better known as the rapper “Nuke Bizzle” — has been arrested on federal charges related to allegations he used stolen identities to apply for more than $1.2 million in unemployment benefits.

The U.S. Attorney’s Office said Baines boasted about the scheme in a music video uploaded to YouTube that included the lyrics: “Unemployment so sweet.”

States across the country have struggled with fraud as unemployment claims have soared.

"The numbers that we saw in August and September that were so high for Pandemic Unemployment Assistance now turn out to be riddled with fraudulent claims," said Michael Bernick, a former director of California’s Employment Development Department and an attorney with the Duane Morris law firm. "This is what we see with other large government programs, especially ones like that that were put together rapidly and without a lot of good safeguards."

But recently, the number of PUA claims in California have fallen dramatically. The state processed 25,168 PUA claims last week. That’s after California stopped accepting new claims for two weeks so it could upgrade its software.

The Employment Development Department says it is working with national, state and local partners "to expose, identify, and prosecute offenders to the fullest extent of the law."