Community leaders gathered in the downtown Los Angeles Fashion District Thursday to call on police to step up patrols in the area in response to the broad-daylight fatal stabbing of a business owner, and they called for the two teen suspects in the slaying to be tried as adults.

LOS ANGELES - Community leaders gathered in the downtown Los Angeles' Fashion District Thursday to call on police to step up patrols in the area in response to the broad-daylight fatal stabbing of a business owner, and they called for the two teen suspects in the slaying to be tried as adults.

Du Young Lee, 56, was fatally stabbed Saturday near Olympic Boulevard and Wall Street, near the wig shop he ran for almost two decades. Witnesses said two teens tried to steal a wig from the store, but Lee chased and confronted them, leading to the stabbing.

Two 17-year-old suspects, a male and female, were arrested and charged in juvenile court with murder and robbery.

A group of Korean and Black community leaders held a news conference downtown Thursday asking for increased police protection in the area. Hyepin Im, president and CEO of Faith and Community Empowerment, said Lee "felt compelled to have to respond and chase after this individual."

She noted that Lee's daughter has expressed frustration in the past when her father put himself in danger by confronting shoplifters for petty theft. 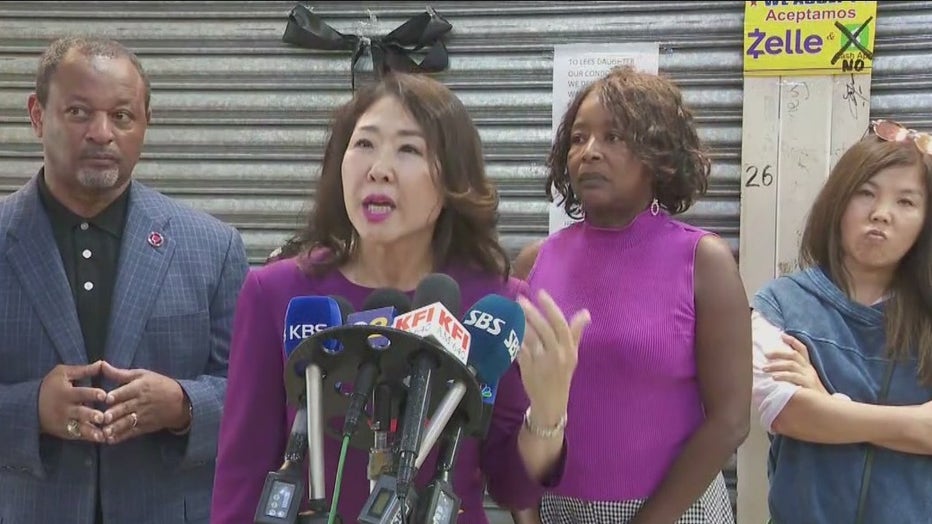 "And yet, the surrounding business owners have said, `You know what? Your dad is a hero.' Why? Because he believed and knew that if he did not stand up to crime, violence, that it would continue to expand in this area."

The activists, in addition to asking for more police protection, said the teens should be charged as adults. District Attorney George Gascón, however, generally opposes transferring juvenile offenders to adult court.

In announcing the criminal charges Wednesday against the teens, Gascón noted that Lee was "killed in the middle of the day on a busy street in downtown L.A. while simply trying to run his business. His death is a tremendous loss for his friends, family and all who knew him. I want to make it clear that my office will work diligently to hold accountable individuals who engage in violent acts -- even if they are minors."

The owner of the building that houses Lee's store told FOX 11 security video from Saturday shows the two teens in the store looking at a wig, then running off with it.

Young, known as Tommy, "had a record of being tough and going after robbers," the landlord told the station. "He started chasing them around (the) shopping center and then the boy pulled out a knife and shanked him right in the heart."

The landlord said Lee died over a wig.

A GoFundMe page established by Lee's 25-year-old daughter had raised more than $61,000 as of Thursday afternoon. The page is seeking help to pay for funerals in the United States and South Korea.

"Over the past five years, my father has been in multiple incidents like this, confronting shoplifters and getting beat with a golf club, getting beat by multiple men breaking his nose and fracturing his arm," Chaerin Lee wrote on the page. "Every time he would come back home with injuries like this, I would tell him, `Just give it to them, it's too dangerous,' but not once did he listen. This has infuriated me very much in the past, but after Tommy had passed away, I got to speak with one of his neighbor store owners. She told me, `Tommy wasn't fighting for himself, he was protecting all the small business owner(s) there. Because if you just let them steal easily, they are going to keep coming back. He was more like a brave heroic figure to us."'

The teen suspects -- who remain in custody -- are due back in juvenile court Oct. 26, according to the District Attorney's Office.