LOS ANGELES - California is experiencing a double whammy of a bomb cyclone and damaging winds.

That being said – the storm systems will bring challenges to Angelenos when it comes to their morning and evening commutes and late-night plans. Will the dogs have to stay inside instead of going outside? How much longer will we need our umbrella? Should you cancel daytime appointments?

FOX 11 has you covered on how much rain to expect for various parts of Southern California. Long story short: Stay home if you can as the storms are expected to deliver soggy conditions on the road and winds that may knock down trees and power lines.

In fact, these storms should not be taken lightly as Gov. Gavin Newsom declared a state of emergency throughout California.

Flash floods, mud flows and debris flows are all risks in areas like Duarte as a dangerous storm approaches California.

WHEN WILL LA SEE THE MOST RAIN?

As for the timing of the rain, here's what we know so far, according to the National Weather Service:

High Wind warnings span much of Central California into Thursday morning. Gusts in the Sacramento Valley and coastal mountainous regions could reach up to 70 miles per hour. In Southern California, gusts from 50 to 70 miles per hour are likely in the mountains and central coastal regions.

Up in Santa Barbara County Wednesday evening, a mandatory evacuation order has been issued for parts of the Alisal, Thomas and Cave fire burn scar areas due to flooding and debris flow concerns. Officials did not specify when the evacuation order will be lifted.

Below is a timeline shared by NWS: 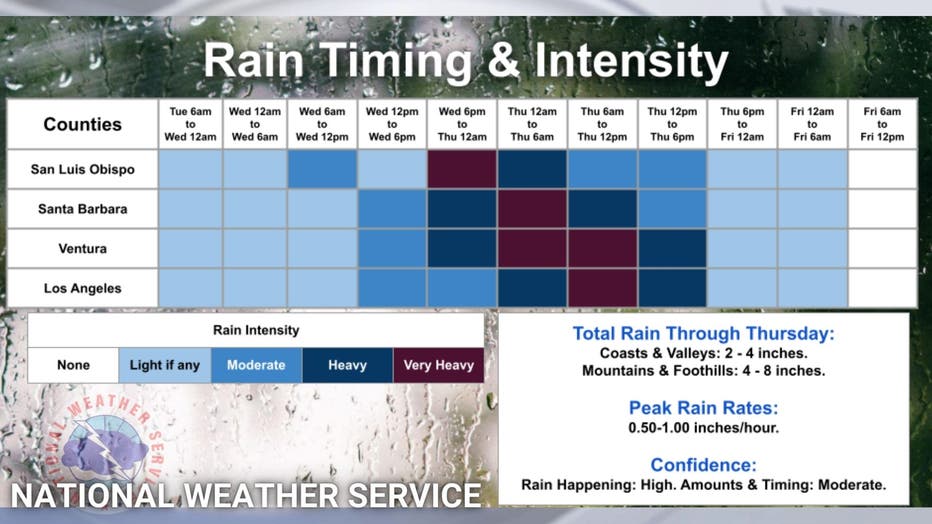 Stay with FOX 11 Weather for the latest forecast.