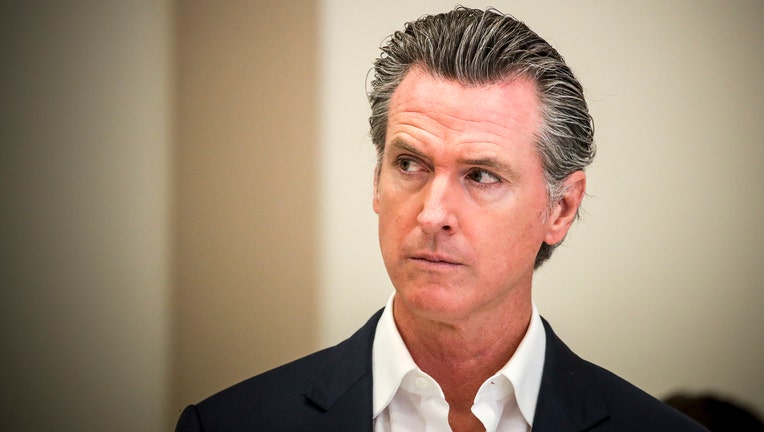 The official list of who's running in California's recall election of Democratic Gov. Gavin Newsom remained unsettled Sunday, with conservative talk radio host Larry Elder maintaining he should be included and state officials giving no details as to why he wasn't.

Secretary of State spokeswoman Jenna Dresner said all candidates who didn't qualify were told why, but a spokesperson for Elder's campaign said they did not receive any notification. The spokesperson, Ying Ma, said Elder submitted voter signatures from three counties and the campaign assumed the state hadn't finished adding them together. Candidates must pay a nearly $4,200 filing fee or submit 7,000 signatures.

Though Ma said the campaign expected the issue to be resolved Monday, Dresner said "any changes to the list at this point would be through court order."

When Elder announced his candidacy July 12, he instantly became one of the most recognizable Republicans in the field given his years on talk radio and appearances on Fox News and was viewed as a candidate who could further energize GOP voters. Though Elder is likely to excite many voters, most Republicans are unlikely to stay home if he's not on the list, said Jack Pitney, a professor of political science at Claremont McKenna College.

"I think Republicans are going to show up because they hate Newsom, not because they are particular fans of any of the replacement candidates," Pitney said.

While promoting a $1.5B proposal aimed at clean-up and beautification, Newsom spoke with FOX 11’s Elex Michaelson for The Issue Is, the two talking budget surpluses, recall politics, and the state’s planned economic reopening on June 15, among many other subjects.

Among other candidates, former San Diego Mayor Kevin Faulconer's campaign was in a dispute with state officials over whether he could be listed as the city's "retired" mayor and YouTube creator Kevin Paffrath said he planned to sue to get his YouTube nickname on the ballot. Meanwhile, Caitlyn Jenner, the Olympian-turned-reality-TV-star, was reportedly in Australia filming a reality show, though she tweeted Friday she and her campaign team are "in full operation."

The Issue Is: Kevin Faulconer, Carla Marinucci and Jeremy B. White

Elex sits down with former San Diego Mayor Kevin Faulconer on his run for Governor. Politico's Carla Marinucci and Jeremy B. White joins the show to discuss Gov. Newsom's rollercoaster week and the recall challengers.

The list of 41 candidates released Saturday by the state lacked the panache of the more than 100 candidates who ran in California's last recall of a governor in 2003. But it included a range of candidates from the anonymous to the famous, including an entertainer known for putting herself on Los Angeles billboards in the 1980s and others with eye-catching names, like deputy sheriff Denver Stoner, and Nickolas Wildstar, who lists himself as a musician/entrepreneur/father.

The list includes 21 Republicans, eight Democrats, one Libertarian, nine independents and two Green Party members. Ballots will start going on next month in the mail, and the official election date is Sept. 14.

Each candidate is listed with a job title or other descriptor, but they are not allowed to use the word "former." Faulconer's campaign requested he be listed as San Diego's "retired" mayor, which state officials are now disputing, Faulconer spokesman John Burke said. He left the office in 2020, and reference to his prior role would help boost his name identification.

Paffrath said he plans to sue after he was denied being allowed to list himself as Kevin "Meet Kevin" Paffrath on the ballot, which includes his YouTube name. He noted another candidate was cleared to run as Chauncey "Slim" Killens, who lists himself as a retired correctional officer.

No Democrat with political stature decided to run. Polls have shown Newsom well positioned to win. But should he lose in an upset, there would be no established Democrat among replacement candidates, potentially opening the way for a Republican to take the seat.

Voters will be sent a ballot with two questions: Should Newsom be recalled, and who should replace him. If more than half of voters say "yes" to the first question, then whoever on the list of potential replacements gets the most votes is the new governor of the nation’s most populous state. With numerous candidates and no clear front-runner, it’s possible the someone could win with less than 25% of the votes.

The push to oust Newsom is largely rooted in frustration with long-running school and business closures during the pandemic that overturned daily life for millions of Californians. But many voters aren't paying attention, and there were no new candidates who emerged Saturday who appeared to have the potential to reorder the trajectory of the race.

According to the secretary of state's office, candidates who have filed the required paperwork include: