The parents could face a fine or a misdemeanor charge for violating Marin County’s health order, under which people who test positive for the virus must isolate themselves for at least 10 days.

Dr. Matt Willis, the county’s public health officer, told The Associated Press that a decision will be made early next week whether the family will face a penalty.

"It’s a violation of the law that we’ve put in place," he said. "More importantly it’s also a violation of just basic ethics of community responsibility."

The child tested positive for the virus during the week of Nov. 8, according to Brett Geithman, superintendent of the Larkspur-Corte Madera School District. Both children continued to attend school the rest of that week and into the following week.

The child and their sibling, who later tested positive as well, are students in the district’s Neil Cummins Elementary School in Corte Madera, a town in Marin County that’s 15 miles north of San Francisco. 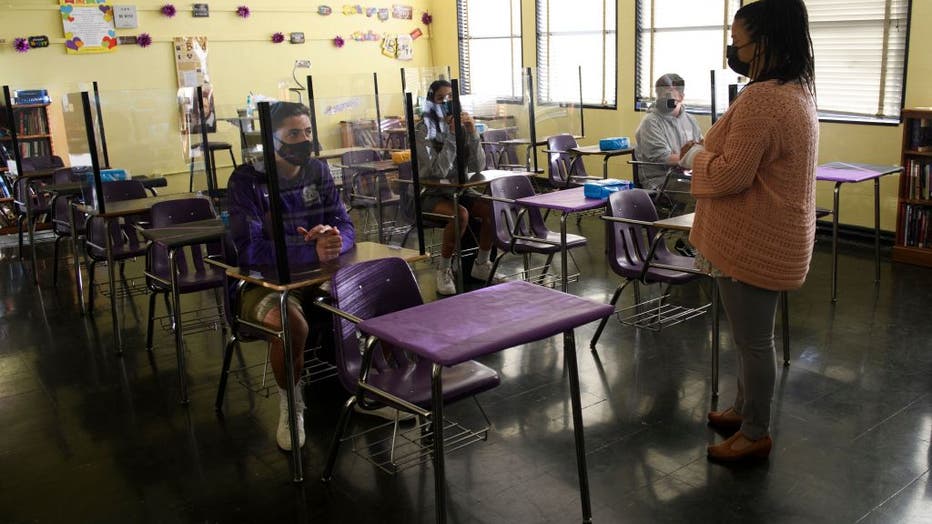 The parents did not notify the school of the positive test or return multiple calls from public health contract tracers, Geithman told AP.

"Our enforcement team is evaluating the circumstances and will respond accordingly," Marin County Public Health said in a statement. "Thankfully, this is the only known occurrence of a household knowingly sending a COVID-19 positive student to school."

Willis said when the school’s principal spoke to the family, "they had cited that they were not clear on the protocol" to isolate the child after the positive test.

Willis said language barriers or economic factors — meaning the parents could not take time off from work when the kids needed to isolate at home — did not appear to be a factor for the family.

He also said it was "quite simple" for people to know not to send their children to school if they test positive for the virus.

On Nov. 18, public health officials contacted the school district after they noticed a discrepancy in records, according to Geithman.

"We noticed you didn’t enter student X into the database" of students with COVID-19, Geithman said district officials were told.

The district immediately contacted the families of students who were exposed and told them to report to the school for rapid testing the next morning.

About 75 students were exposed to the virus from the eight cases, the superintendent said. No staff members tested positive.

Schools have an indoor mask mandate.

"Had those children been unmasked, we would have seen a lot more transmission," Willis said. "We depend on one another to prevent spread and this is kind of a stark and unfortunate lesson in what happens when we don’t follow the protocols."

Geithman said he did not know whether the original student and their sibling had received any doses of the vaccine.

The district issued a "corrective action" to the family but Geithman said he could not discuss what that was. The superintendent said the family caused a "safety risk" to students, staff and the school community that easily could have spread further over the Thanksgiving break if the exposed families had not been informed.

"This highlights that we are all in this together," he said. "This is something where, to get through COVID-19, we all have to do our part. Our actions impact the health and safety and wellbeing of others."

The district reopened for in-person instruction in October 2020 and this is its first case of classroom-based transmission, Geithman

"This one family, as troubling as it’s been, this is not the norm," he said.

In May there was an outbreak at Our Lady of Loretto School, a private parochial elementary school also in Marin County, linked to an unvaccinated teacher. The teacher would unmask while reading aloud to students — despite an indoor mask mandate — and worked at the school despite a cough, fever and headache until testing positive later.

Altogether 26 other people — including students and their parents — were infected. A report by the Centers for Disease Control and Prevention, released in August, identified the virus in that outbreak as the delta variant.