Sixty-eight-year-old David Chou of Las Vegas has been charged for the shooting at the Geneva Presbyterian Church in Laguna Woods Sunday. If convicted on all counts he could face the death penalty.

LAGUNA WOODS, Calif. - Prosecutors in Orange County announced charges Tuesday against the suspected gunman in a shooting at a church in Laguna Woods, killing one and wounding five others.

The suspect was identified by OC sheriff’s officials as 68-year-old David Chou of Las Vegas. He has been charged with one felony count of murder, five felony counts of premeditated attempted murder, four felony counts of possession of an explosive device, and felony enhancements of lying in wait and personal discharge of a firearm causing death.

Chou faces a maximum sentence of death if convicted on all charges.

Chou is accused of opening fire during a lunch reception at Geneva Presbyterian Church on Sunday afternoon. Officials said a pastor hit Chou on the head with a chair and parishioners hog-tied him with electrical cords.

Chou appeared in court briefly Tuesday but did not enter a plea. His arraignment was continued until June.

The victim killed was identified as Dr. John Cheng, 52. Cheng was regarded as a hero and authorities said he charged the gunman, sacrificing himself "so that others could live." 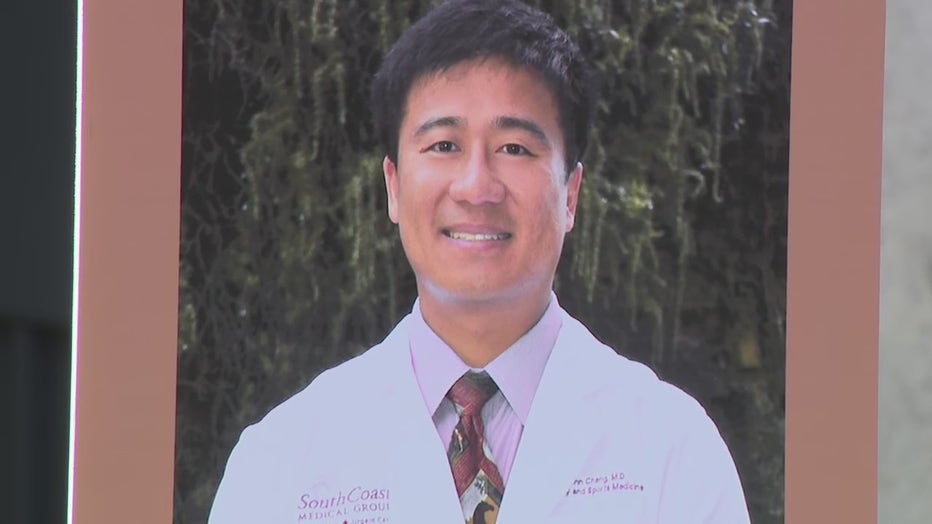 John Cheng, 52, was killed when a gunman opened fire during a lunch reception at Geneva Presbyterian Church in Laguna Woods, killing one person and wounding five others. (FOX 11)

Sheriff's officials said that all the parishioners attending were Asian-Americans, ranging in age from 66 and 92 years old.

Investigators revealed Monday that Chou left notes in his vehicle that detailed his hatred for the Taiwanese community. They believe his alleged hatred of Taiwan manifested when he was residing there in previous years, possibly in his youth.

"He was not well received while living there, according to what we believe we've collected so far. And that's manifested into this hatred that's combined with the political environment of his hatred of the Thai, not Taiwan, US people between the China and Taiwan, tensions that are currently occurring that answer your questions. That's part of the ongoing investigation," said Sheriff Don Barnes.

On Tuesday, FOX 11's crew on scene reports Chou did not enter plea and that the suspected gunman's arraignment proceeding will resume on June 10.

As of Tuesday evening, Chou remains in custody without bail.

Is the death penalty possible?

"The suspect is eligible for life without the possibility of parole or death," Orange County DA Todd Spitzer said in a news conference on Monday.

Orange County District Attorney Todd Spitzer discusses what's next for the suspected gunman in the deadly church shooting that took place in his county over the weekend.

Spitzer explained he went to the gruesome scene in Laguna Woods Sunday. "The reason I was there is because at some point in time down the road, I will have to determine as a district attorney, whether we will be seeking death."

During a press conference Wednesday, Spitzer said all 10 counts filed carry the maximum punishment allowed by law, which is death or life without the possibility of parole.

"We have charged these counts and added these enhancements. We still file enhancements in Orange County and that’s how we’re getting to life without the possibility of parole, or death. And I stand very firmly in the fact that enhancements are a very important tool for prosecutors to get justice for the victims," Spitzer said.

He spoke with FOX 11 Tuesday night about what was considered.

"The death penalty is the most solemn punishment we have in society and certainly that’s not a judgment I’m going to be rushed into making. This is a very serious crime and I’m looking at the trauma and the impact to the victims. At the same time, I’m obligated and will consider his age, whether he had a criminal background, and other mental issues that may have been going on," he said.

Investigators continue to review surveillance footage and sort out evidence collected in Las Vegas and at the scene in Laguna Woods.

Was this a hate crime?

Officials said while a hate crime enhancement could be filed Tuesday, they are still examining the evidence.

"While there is very strong evidence this was motivated by hate, we want to make sure we have put together all the evidence that confirms that theory of the case," Spitzer said.

Why is the FBI involved?

The FBI currently has an open investigation into this case. Spitzer said it's important to note that the FBI has statutes California does not have.

"They are here because they initially were dispatched because it appeared this might be an active terrorism mass shooting. I've made a commitment to work side by side with the FBI and US Attorney," he added.

Spitzer clarified that while state charges can be filed, federal officials can still file their case and they can be concurrent.