A protest was held outside of Burbank City Hall to demand an end to illegal street racing and call for city leaders and police to step up enforcement.

BURBANK, Calif. - A protest was held outside of Burbank City Hall Tuesday to demand an end to illegal street racing and call for city leaders and police to step up enforcement.

The protest follows a suspected street racing crash on North Glenoaks Boulevard and Andover Drive that killed three young people one week ago. Cerain Baker, 21, from Pasadena, Jaiden Johnson, 20, from Burbank, and Natalee Moghaddam, 19, from Calabasas all passed away in the crash.

"Hold these people accountable. Make sure that if they don't do anything about this, you vote them out," said Aida Rodriguez, a comedian and family friend of one of the victims. 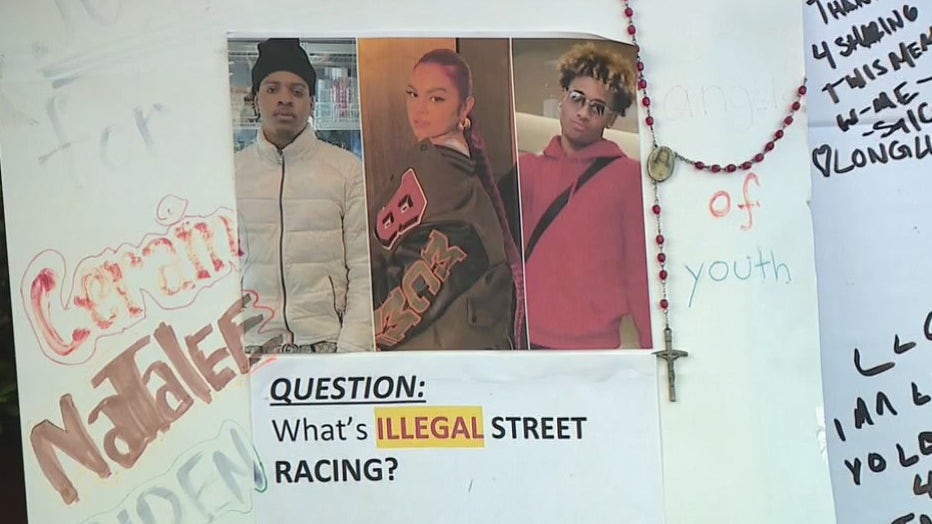 According to the Burbank Police Department, the driver of a Volkswagen carrying three passengers was making a left turn when a Kia and a Mercedes were speeding down the street. Police said it appears the Kia T-boned the Volkswagen and the impact of the crash was so powerful, three people were thrown from the Volkswagen and a fourth person was trapped inside one of the other vehicles.

"I just want to say that Cerain's death is a complete waste. He was a fine young man. His parents did a great job raising him. He was very talented and he had a lot of potential for the future," said Maye Osbourne, a family friend.

Sabrina Castro, a spokesperson for the Baker family, also spoke at the protest.

"His [Cerain Baker] last words to us was 'love y'all' and I said love you too and I said see you tomorrow, and I didn't know. I just really hope that no other family has to feel what we're feeling right now. To watch his parents break down and not knowing what to do," said Castro.

Castro and the community members came to the protest with signs asking for "safer streets."

"Let's do something about street racing. It's still happening to this day. They're not learning their lesson and that's not OK," said Castro.

"I live no more than two blocks where the crash occurred, and all the time while I'm lying in bed, I hear these racers racing up and down the streets and it needs to change, something needs to be done," said Luke Martinez.

Castro said Cerain, Jaiden and Natalee were all friends. Cerain and Jaiden were pursuing their passion to work in the music industry.

"The last two years, they really took their music seriously. Jaiden, his beats have gotten so much better, and then Cerain lyrically has really tapped into who he is and who he wants to be as an artist. They were headed to the top because it was getting good," she said.

Cerain's father, Tony Baker, is a popular comedian. He posted on his social media page saying within 30 minutes, community members helped raise enough money to cover the funeral expenses for Cerain. He thanked his "village" for all of the support.

The Burbank Police Department provided an update Tuesday saying the female driver of the Volkswagen who was the sole survivor in the car, was released from the hospital Tuesday. The driver of the Kia is still in the hospital in "stable condition." No arrests have been made and the investigation continues.