RIVERSIDE, Calif. - The man dubbed the "oldest living general'' will celebrate his 107th birthday in Riverside on Saturday, with a presentation by the mayor, an honor guard salute, proclamations and other tributes to mark the milestone.

Retired U.S. Air Force Lt. Gen. Harry E. Goldsworthy, who was born in 1914, will be honored in an hourlong event near his residence in Westmont Village, a gated retirement community adjacent to March Air Reserve Base.

Goldsworthy retired from active service in 1973. His wife, Edith, died a decade ago. 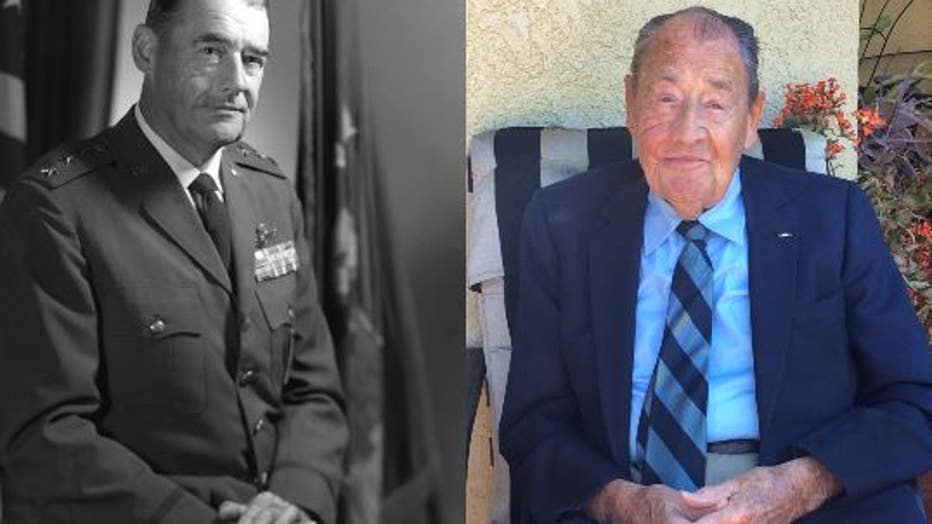 According to organizers of the birthday celebration, Riverside Mayor Patricia Lock-Dawson will formally present a City Council proclamation lauding the general for his service, and the occasion of reaching 107.

The Patriots, a Riverside-area group of military veteran motorcyclists, will be on hand as part of a flag ceremony that will also involve non-commissioned officers from March ARB. Two sergeants will present Goldsworthy with a certificate of appreciation for his national service.

Jamil Dada, president of the March Field Air Museum Board of Directors, will present multiple proclamations -- from the museum, the Moreno Valley Chamber of Commerce and the March Joint Powers Authority.

Riverside County Supervisor Jeff Hewitt is also slated to read a Board of Supervisors proclamation.

Goldsworthy began his military service as a U.S. Army infantry reservist, following graduation from Washington State College in 1936. After working as an insurance salesman and doing a stint with the U.S. Soil Conservation Service, he applied for admission to the U.S. Army Air Corps and was accepted for flight training as a second lieutenant.

According to his biography, Goldsworthy served most of World War II flying submarine patrols around Puerto Rico and the east coast until he was assigned to fly missions in campaigns against the Japanese during the summer of 1945.

After the war, he held a series of posts, commanding a bomber group at Carswell Air Force Base in Texas, working as a weapons system evaluator for
the Joint Chiefs of Staff, serving as vice commander of the 4061st Air Refueling Wing at Malmstron Air Force Base in Montana and Activation Task Force commander for the Minuteman Intercontinental Ballistic Missile Wing, also in
Montana.

His last assignment before retirement was as deputy chief of staff for systems and logistics at Air Force Headquarters in Washington, D.C. According to his family, Goldsworthy was an active golfer until a few years ago. He has lived in Riverside since 1990.