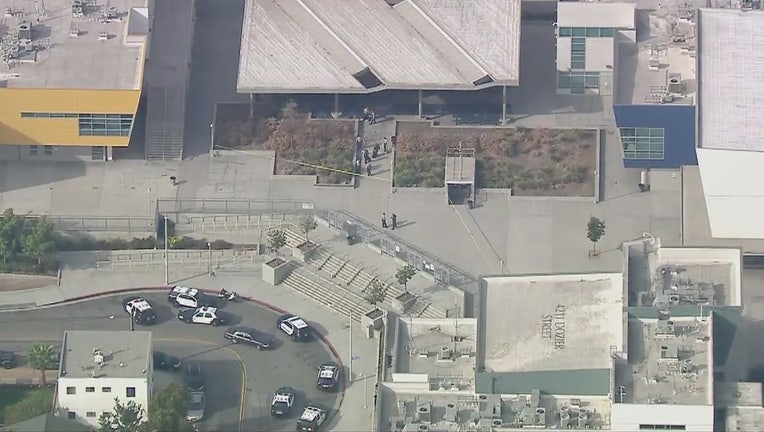 LOS ANGELES - Crisis counselors were made available Thursday to all staff and students at Esteban Torres High School in East Los Angeles, one day after a man involved in a family disturbance and wielding a 3-foot sword was killed in a deputy-involved shooting on campus.

Omar Garcia, 37, who was homeless, died at the scene of the shooting at the school in the 4200 block of Dozier Street, according to the coroner's office and the Los Angeles County Sheriff's Department.

No deputies, students or staff were injured. Sheriff's officials said the suspect had no connection to the school.

According to the sheriff's department, deputies responded to two 911 calls at about 8:35 a.m. Wednesday in the 900 block of North Miller Avenue, not far from the school.

"The call was a family disturbance, violation of a restraining order," sheriff's Lt. Brandon Dean said at a news conference early Wednesday afternoon near the campus. "The suspect was a named disturbing party in a
restraining order on several family members at the location."

When deputies arrived, they spotted the suspect carrying a 3-foot sword, Dean said.

"At one point, the deputies gave chase to the suspect, and the chase ultimately ended up on the property of Esteban Torres High School," Dean said.

The chase led to the lunch area, where deputies "gave the suspect several orders to drop the sword," Dean said.

"However, at one point, the suspect advanced on one of the deputies -- wielding the sword in the air -- and a deputy-involved shooting occurred," Dean said.

Only one deputy fired, he said.

No students or school staffers were targeted or threatened by the suspect, Sheriff Alex Villanueva said, and the school went into an immediate lockdown.

"There was no harm to any of the students," Villanueva said. "They are all safe and sound."

Counselors would be made available to any students or staff who may have witnessed or heard the shooting, Zipperman said