CAPE CANAVERAL, Fla. - Over 50 years ago, as human beings first set eyes upon another world, they paused to celebrate Christmas Eve and reflect on what the holiday meant for the conflicted planet they’d left behind.

It was December 24, 1968. The crew of Apollo 8 was rocketing towards the moon – the first time that man had left Earth’s orbit. It was a daring mission, less than two years removed from the launch pad fire that had claimed the lives of three fellow astronauts. But Frank Borman, Jim Lovell, and Bill Anders were trying to get NASA back on track to meet John F. Kennedy’s goal of landing on the moon before the end of the decade.

Apollo 8 was only the second crewed flight of the Apollo program; Apollo 7 had been a successful 11-day test of the new Apollo capsule that had, among other things, featured the first live television broadcast from an American spacecraft. 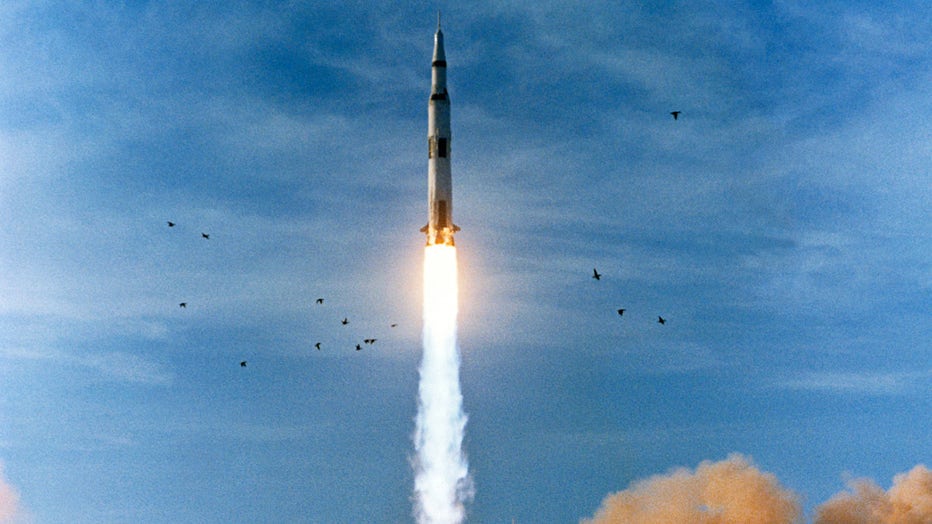 The achievements of Apollo 7 gave NASA the confidence to send Apollo 8 on a daring mission around the moon. The lunar lander wasn’t yet ready to fly, so the crew would test the Apollo capsule’s ability to navigate deep space and get a look at the lunar surface from just over 100 miles up.

NASA wasn’t just racing against time – the U.S. was also racing the Soviet Union to the moon against the backdrop of the larger Cold War. Amid the constant threat of nuclear war, rumors at the time accurately hinted that the USSR was also developing a superbooster to counter the Americans’ powerful Saturn V rocket. 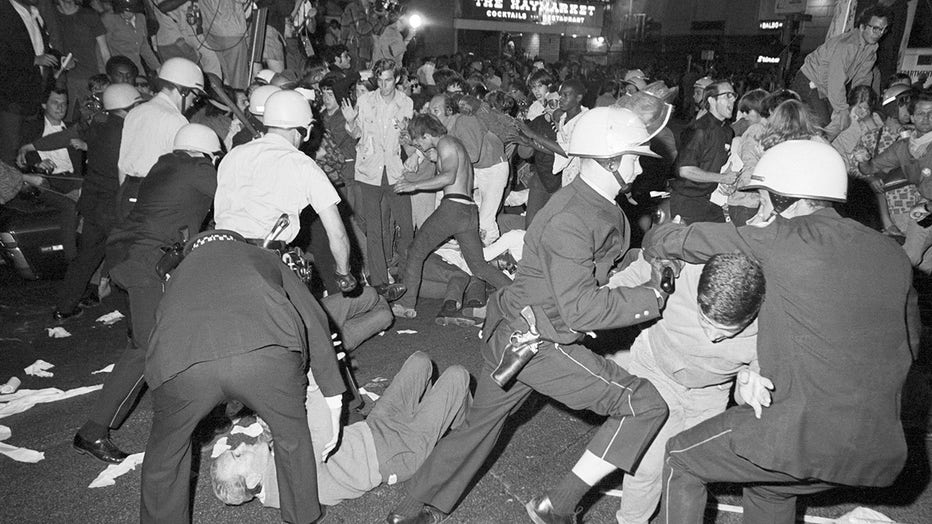 Original caption: Police and demonstrators are in a melee near the Conrad Hilton Hotel on Chicago's Michigan Avenue, August 28th, during the Democratic National Convention. (Bettmann via Getty Images)

The war was famously divisive at home, with protests raging at college campuses and Selective Service offices across the country as young men were drafted to serve. The violent clash between demonstrators and authorities at the 1968 Democratic National Convention in Chicago was captured on live television for millions to see. 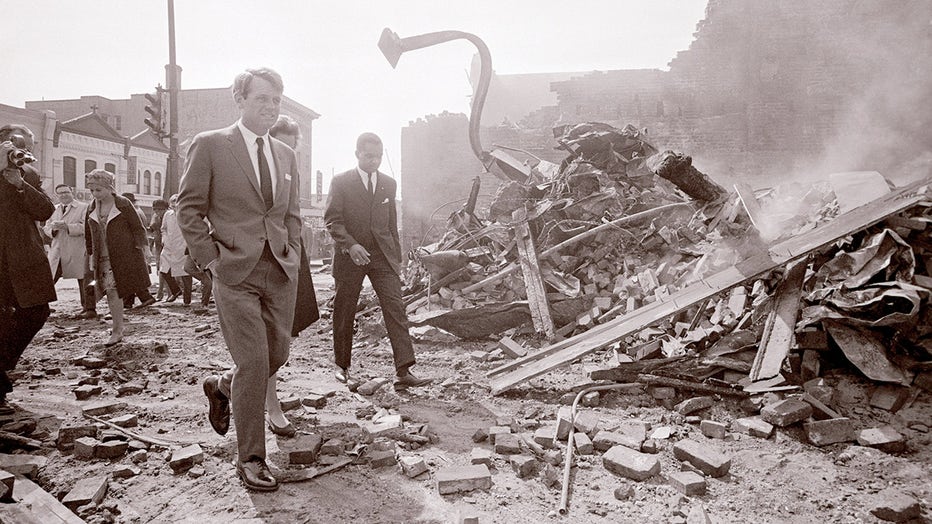 NASA once again planned to utilize the live TV feed during Apollo 8, this time to hear from the astronauts as they headed to the moon for the first time. So the crew knew they’d have a massive global audience on Christmas Eve – possibly the largest in history, NASA noted – but Commander Borman later explained that the agency only guidance was to "do something appropriate."

After lengthy conversations with experts and friends, ultimately the wife of a friend suggested they "start at the beginning" – the book of Genesis. 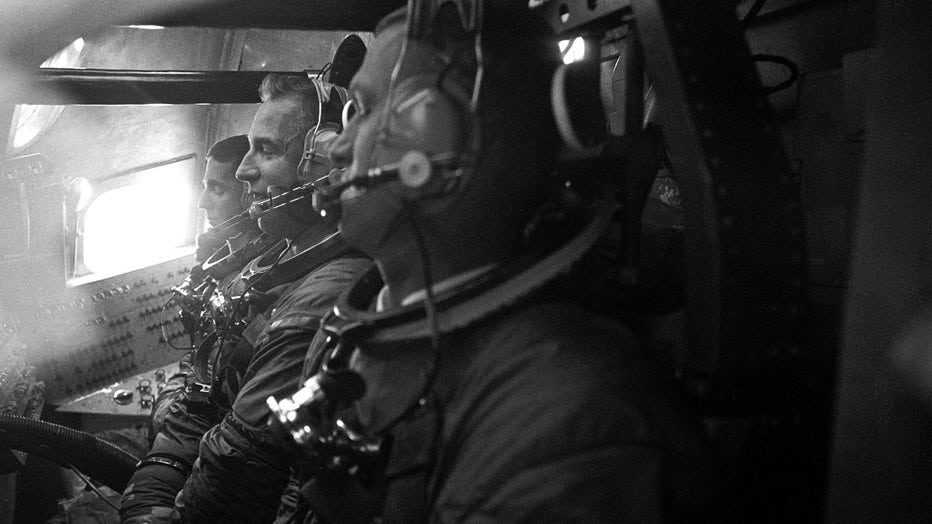 The Apollo 8 prime crew is seen inside Apollo Boilerplate 1102A during water egress training in the Gulf of Mexico. From the foreground are astronauts Frank Borman, commander; James A. Lovell Jr., command module pilot; and William A. Anders, lunar mo

So as the Apollo 8 capsule coasted above the lunar surface, the astronauts beamed back live images of the moon and Earth as they took turns reading from the book of Genesis, famously closing with a wish for everyone back home:

"Good night, good luck, merry Christmas, and God bless all of you – all of you on the good Earth."

Two days after Christmas, the Apollo 8 crew safely splashed down in the Pacific, marking the first time that explorers had left the confines of Earth and returned home. The successful mission set the stage for a lunar module test on Apollo 10 and then, of course, the milestone lunar landing on Apollo 11 in July of 1969.

Despite the monumental landing on Apollo 11, the Apollo 8 mission is also remembered for a more romantic first – capturing the first and most famous "Earthrise" photo. 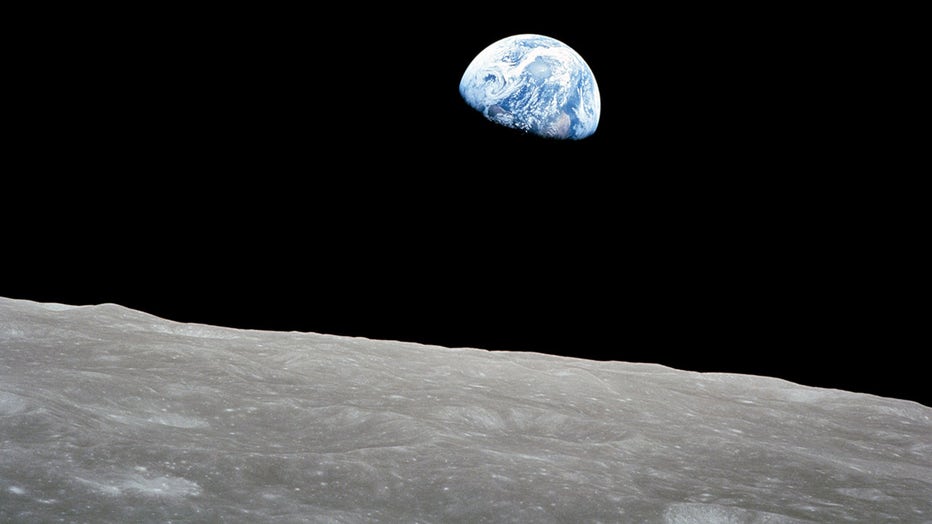 On Dec. 24, 1968, Apollo 8 astronauts Frank Borman, Jim Lovell, and Bill Anders became the first humans to orbit the Moon, and the first to witness the magnificent sight called "Earthrise." As the spacecraft was in the process of rotating, Anders too

It was the first time that humans had seen the Earth as a full disc, and it was something the crew never forgot.

"Looking back at the earth on Christmas Eve, I think had a great effect, I think, on all three of us," Borman said in 1999. "The wonderment of it, the fact that the earth looked so lonely in the universe. It’s the only thing with color. All of our emotions were focused back there with our family. So that was the most emotional part of the flight for me."

"We came to explore the moon and what we discovered was Earth," Anders has been known to say. 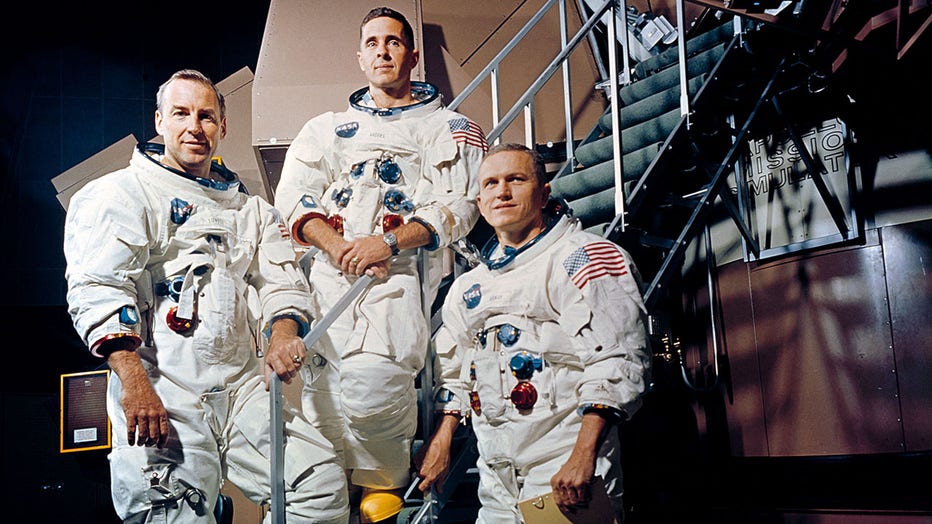 Astronauts James (Jim) Lovell, Frank Borman, and William (Bill) Anders pose for a portrait in their space suits on November 22, 1968, just less than a month before they would orbit the Moon. (NASA photo)

Borman later recounted how the crew got a telegram from a grateful person telling the crew they "saved 1968." But for him, it was a team effort on the part of thousands of people in the Apollo program.

"That was the important thing: To do it. And to have it accomplished. And to extend humans’ horizons. That was what came out of Apollo – not how do you make Teflon pots and pans," he added. "I think that Apollo was extremely important. I think it may have been, other than World War II, it may have been the most important project in this century."