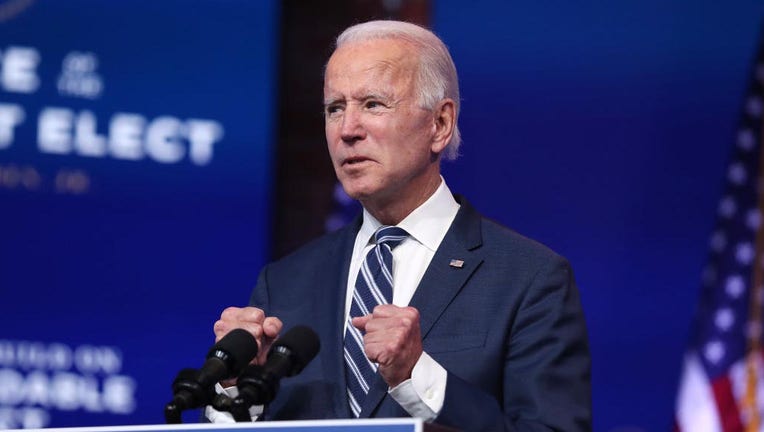 President-elect Joe Biden addresses the media on Nov. 10, 2020 at the Queen Theater in Wilmington, Delaware. (Photo by Joe Raedle/Getty Images)

ATLANTA - The Associated Press has called Georgia for Joe Biden as the Secretary of State's Office said it has completed a hand recount audit of the vote.

The state's 16 electoral votes will be awarded to Biden when the election results are certified on Friday. In a statement, Jaclyn Rothenberg, Georgia Communications Director writes:

"The recount process simply reaffirmed what we already knew: Georgia voters selected Joe Biden to be their next president. We are grateful to the election officials, volunteers, and workers for working overtime and under unprecedented circumstances to complete this recount, as the utmost form of public service."

The state's hand audit found a few thousand ballots that were not counted in two counties, Floyd and Forsyth counties, but it was not enough to change the end results.

“Georgia’s historic first statewide audit reaffirmed that the state’s new secure paper ballot voting system accurately counted and reported results,” said Secretary Raffensperger. “This is a credit to the hard work of our county and local elections officials who moved quickly to undertake and complete such a momentous task in a short period of time.”

"Headlines are already falsely reporting that Joe Biden is declared the winner in Georgia. Sorry, media, that's not how it works. The State of Georgia has not certified its results, and it should not. This so-called hand recount went exactly as we expected because Georgia simply recounted all of the illegal ballots that had been included in the total. We continue to demand that Georgia conducts an honest recount, which includes signature matching. We intend to pursue all legal options to ensure that only legal ballots are counted."

Secretary of State Brad Raffensperger is expected to announce the certification of the election Friday morning from the State Capitol. Raffensperger was cleared Thursday from quarantine after four negative COVID-19 tests.

In 2020, Democrats had focused heavily on the state, seeing it in play two years after Democrat Stacey Abrams narrowly lost the governor's race. Both of Georgia's Senate seats were on the ballot this year, further boosting the state's political profile as well as spending by outside groups seeking to influence voters. Those two races are headed to a January runoff.

Georgia hadn't voted for a Democratic presidential candidate since Bill Clinton in 1992.