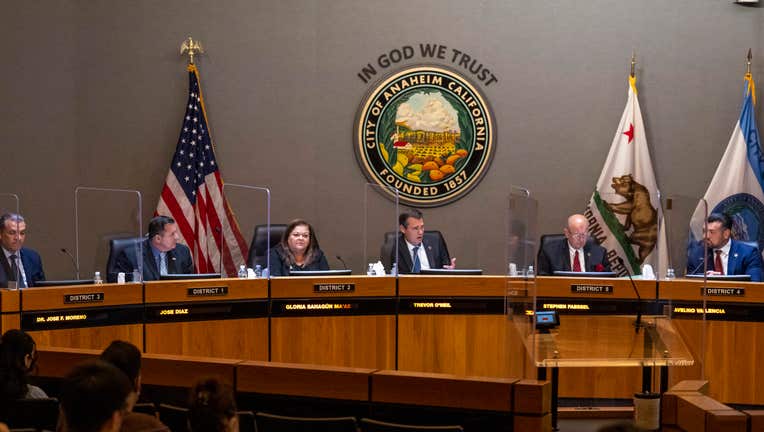 ANAHEIM, CA - MAY 17: The Anaheim City Council meets in Anaheim on Tuesday, May 17, 2022 for the first time after it was announced that Anaheim Mayor Sidhu is under federal investigation in connection with the citys sale of Angel Stadium. (Photo by L

Messages left with Sidhu and his attorney, Paul Meyer, were not immediately returned. Sidhu has not commented publicly on the allegations. Meyer declined to comment Tuesday.

Sidhu did not attend Tuesday's council meeting, and if he misses another meeting with an unexcused absence his seat could be considered vacant. The council is next scheduled to meet June 7.

"The deeply troubling issues that have come to our attention involving Mayor Sidhu since May 16, 2022, raise serious concerns and questions about his ability to continue as mayor of Anaheim," O'Neil, Faessel and Diaz said in the letter to Sidhu's attorney.

On Tuesday, an Orange County Superior Court judge put the stadium deal on pause at the request of the state Attorney General's Office, which revealed the corruption probe in its legal papers.

In an unusual move, the attorney general's court papers included an FBI search warrant affidavit detailing elements of the federal probe, including two confidential informants, one of whom was wired to secretly record conversations with the mayor.

Just a few weeks ago, the Attorney General's Office hailed an agreement with Anaheim that resolved a dispute over affordable housing in the stadium deal, which includes the stadium itself and surrounding parking areas.

As part of the settlement, Anaheim agreed to set aside about $123 million for affordable housing throughout the city, with $96 million dedicated to the creation of affordable housing within the next five years, and the rest going toward 466 apartments on site at the stadium for low-income residents.

State officials, however, alleged a violation of the Surplus Land Act, which requires the promotion of affordable housing on unused or underutilized public land in the state. But Anaheim officials argued it had a lease agreement with the Angels and it did not violate the Surplus Land Act.

The agreement between the city and state resolved the issue, with the city not having to concede any violation of the Surplus Land Act.

In the affidavit filed by FBI special agent Brian Adkins last week, Sidhu is accused of using an Arizona address that was not his so he could avoid paying $15,887.50 in California sales tax on a helicopter he bought. The FBI agent said Sidhu apparently also allegedly avoided paying sales taxes of $1,025 in Arizona.

The FBI also alleged in the affidavit — which sought emails and cellphone records — that Sidhu was illegally feeding insider information to Angels officials during the negotiations over the sale of the stadium property from the city to Moreno's development company.

Sidhu used private emails and a cellphone to convey information, then deleted it to conceal his actions, the affidavit alleges. The agent included a transcript of some discussions the mayor allegedly had with a confidential informant, who agreed to cooperate with authorities.

In another meeting with the informant Sidhu allegedly said:

Sidhu was also accused of "coaching" the confidential informant to mislead an Orange County grand jury investigation of the stadium deal.

The affidavit said one of the people allegedly involved in the negotiations is a nationally known political consultant.

Sidhu is also accused of telling the confidential informant to write down all the questions asked by the Orange County grand jury right after he met with them.

The lawmakers said the FBI search warrant leads them to "ask yet another pertinent and timely question. In light of allegations that the negotiator of this deal acted unscrupulously and outside the scope of his public office, what steps does the Anaheim City Council anticipate taking in the immediate future to remedy what appears to be an unfair, collusive sale?"

Umberg and Daly said they hoped that city officials in the next two months "use this time to review the details of this rip-off. It's important this is done in a manner that is open and transparent to the taxpayers and residents of Anaheim, and within the context and expectations of existing California law."

In December 2019, the two lawmakers questioned how the then-agreed-upon sale price of $325 million was much less than the property's appraised value of $500 million.