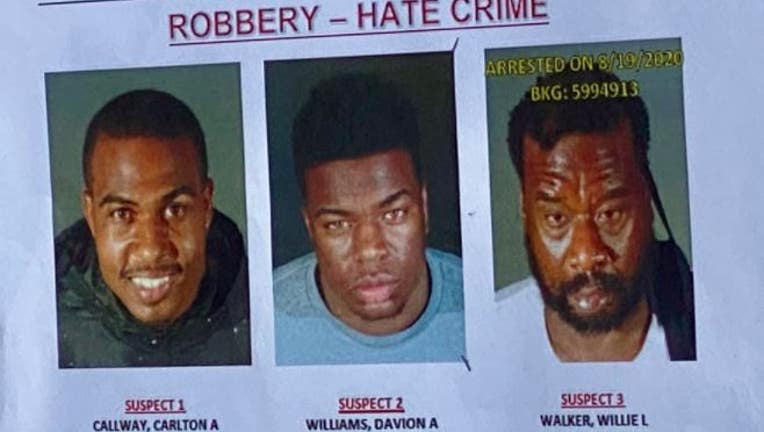 LOS ANGELES - Two Compton men have been charged with an attack last month on YouTube performer Eden the Doll and two other transgender women in Hollywood.

Carlton Alexander Callaway, 29, is charged with one felony count each of assault by means of force likely to produce great bodily injury, battery with serious bodily injury, second-degree robbery, attempted second-degree robbery, criminal threats and grand theft from the person of another, according to the Los Angeles County District Attorney's Office.

Davion Anthony Williams, 22, is charged with one felony count each of assault with a deadly weapon -- a rideshare scooter -- and grand theft.

The criminal complaint includes allegations that the crimes committed were hate crimes and that Callaway used a steel rod as a deadly and dangerous weapon.

• 2 arrested, 1 at large in hate crime on transgender women in Hollywood

Callaway allegedly befriended the three victims and later assaulted them near Hollywood Boulevard and Wilcox Avenue, according to Deputy District Attorney Richard Ceballos.

Williams allegedly joined the attack and stole from one of the women, according to prosecutors.

Callaway was arrested Aug. 20 by the Los Angeles Police Department's Hollywood Division and released from custody last Tuesday after the District Attorney's Office asked police to further investigate the attack.

Eden Estrada -- whose online persona is Eden the Doll -- was waiting for an Uber with Joslyn Flawless and Jaslene Whiterose at about 2:15 a.m. Aug.17 when Callaway approached them, according to the victims' social media posts and the LAPD.

He allegedly offered to buy the merchandise at a store in the 6500 block of Hollywood Boulevard, near Wilcox Avenue but refused to pay and the women left, police said.

He allegedly approached them again with a metal bar and demanded one of the women's shoes and bracelet. She complied out of fear, and the suspect grabbed her hand and forced her to walk a short distance with him before she could escape, police said.

He then allegedly assaulted a second victim with a bottle, knocking her to the ground, according to police.

"He held a crowbar to my face and threatened to kill me unless I stripped my shoes off and gave him my jewelry and all my (possessions)," Joslyn Flawless wrote on Instagram. "He said if I was trans, he would kill me. He then forced me to hold his hand while he looks for my friends to kill them for being trans."

The victims said their phones, wallets and purses were taken.

Estrada said in a social media post that bystanders walked past the victims and did not stop to help, and some witnesses are seen on video laughing at the women.

"To see this level of violence celebrated gleefully, so much so the perpetrator himself posted it on social media, it's like a sucker punch to all of us who believe in civilized behavior," Los Angeles City Councilman Mitch O'Farrell said during a news conference last month.

A video on social media also shows an LAPD vehicle driving by and not stopping.

Members of the public asked LAPD officials during a Los Angeles Police Commission virtual meeting last week why an officer drove by without stopping, according to the Los Angeles Times.

Chief Michel Moore told the commission the incident and the department's response were being reviewed.