The 12-year-old was killed weeks before Christmas 2021.

LOS ANGELES COUNTY, Calif. - The Los Angeles Police Department announced Friday two people have been arrested in connection with the deadly shooting of 12-year-old Alexander Alvarado who was struck by a stray bullet during a series of shootings in Wilmington in December 2021. 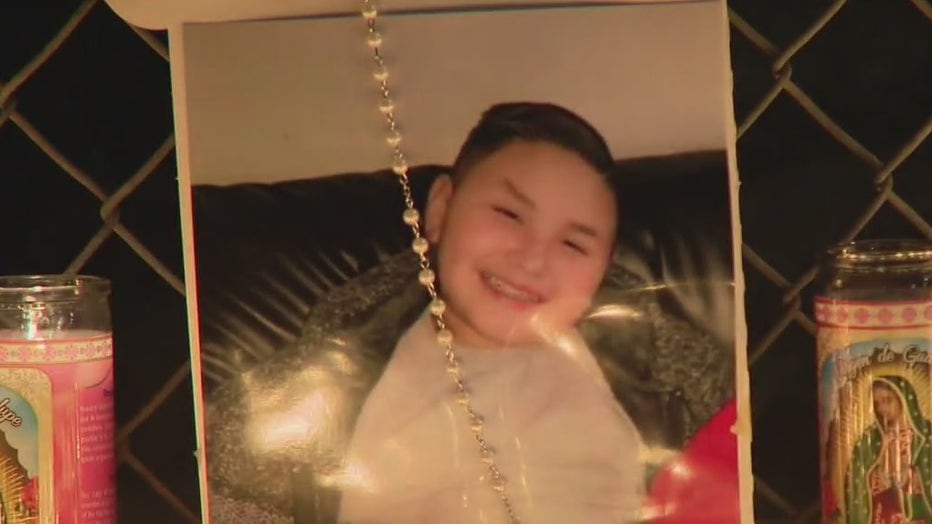 The suspects were identified by the LAPD as 21-year-old Damian Ulysses Martinez and 19-year-old Gabriel Martinez. Officials said the two are cousins and are active East Side Wilmas gang members.

The LAPD has filed the charges of murder, attempted murder, and assault with a deadly weapon. The department has presented its findings to the LA County District Attorney’s Office.

The investigation dates back to Dec. 6 2021 when Los Angeles first responders were called to the 1500 block of East Denni Street just after 4:45 p.m. Officials say Alvarado and 30-year-old Evelyn Romero were sitting in a Dodge Durango when at least two suspects approached the vehicle and opened fire. Neighbors reported hearing at least eight gunshots, leaving the SUV riddled with bullet holes.

Alexander Alvarado was killed after he was hit by a stray bullet in December 2021.

That same evening, police officers also responded to Wilmington Park Elementary School at 1140 Maher Avenue where a 9-year-old student was struck by a stray bullet. The fourth-grade student who was playing in the schoolyard was rushed to the hospital in stable condition. She survived the shooting, and it was later confirmed the two shootings were related.

The LA Police Protective League offered a $20,000 reward for information leading to the arrest and conviction of the gunmen.