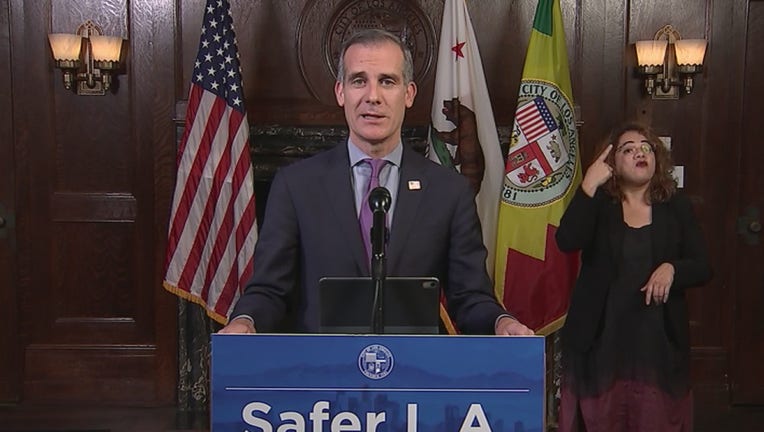 LOS ANGELES (CNS) - Two protesters were arrested Thursday at the third daily demonstration outside Mayor Eric Garcetti's official residence aimed at keeping him from being nominated to a post in President-elect Joe Biden's cabinet.

The Thanksgiving crowd was estimated at between 50 and 100 people. Demonstrations have promised to show up at 9 a.m. at the official residence in Hancock Park "every single day," according to the Black Lives Matter-LA's Facebook page.

The group added that the protests were to "tell @JoeBiden we don't want the worst mayor in the nation setting national policy. Don't appoint Garcetti to anything!''

A video posted on Twitter at 4:18 p.m. showed the Los Angeles Police Department declaring an unlawful assembly and urging protesters to leave the area.

The two arrested protesters were likely processed and issued misdemeanor citations for remaining at an unlawful assembly after the police ordered them to disperse, according to Officer D. Orris of the LAPD's Operations Center.

They arrived late to the event and didn't hear the order to disperse, according to BLM.

Garcetti, who was a co-chair of the Biden-Harris campaign, has repeatedly said he is not seeking a cabinet position at this time, and his political team has told City News Service since Election Day that he has not considered a position.

Garcetti most recently said he was not seeking a cabinet position on Monday when reporters broached the topic during a COVID-19 update.

"I have been focused 110% on these numbers and on COVID and on saving lives," Garcetti said. "It's one of the last things on my mind right now. You know, we have deaths that are going to be increasing, we have record numbers of cases and so I don't have anything to add on that not because I have anything to hide, I just have nothing to add. Right now my job number one is to make sure I protect the lives of Angelenos."

Various news outlets have speculated that Garcetti is under consideration for secretary of Transportation or Housing and Urban Development.