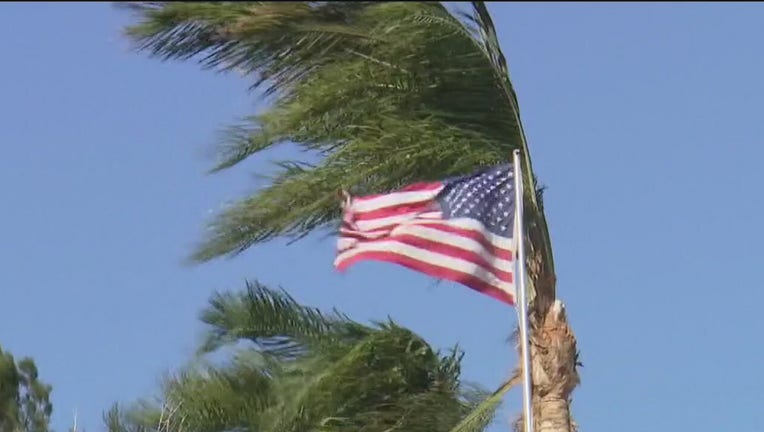 The Santa Ana winds. They're back-- big time-- and that means fire danger.

The National Weather Service has issued a red-flag warning for most valleys and mountains of Los Angeles County and inland Orange County from 6 p.m. Wednesday to 6 p.m. Friday, and to 10 p.m. Saturday in the Santa Clarita Valley and Santa Monica Mountains.

Beginning Wednesday, Santa Ana winds are returning to the Southland&nbsp;prompting a warning for extreme fire danger.

Low humidity combined with the strong winds will increase the risk of wildfires despite moderate temperatures in the 60s and 70s.

A wind advisory is in effect until noon Wednesday in central Los Angeles, and until midnight in the valleys. Gusts of 45 mph are expected in the San Fernando and Santa Clarita valleys and up to 50 mph in the mountains.

"Gusty north to northeast winds for the next several nights and mornings will turn primarily northeasterly for the latter half of the week. Damaging Santa Ana winds are possible across the mountains between Thursday and Friday,'' the NWS said on Tuesday.

The wind event will again raise the possibility of power outages. Southern California Edison warned Tuesday that some customers could be subject to Public Safety Power Shutoffs, in which electricity is cut in particularly wind-affected areas to prevent equipment damage that could spark fires.

"A significant strengthening Santa Ana event is still on target toform Wednesday night through Thursday, then continue into Friday with slow and gradual weakening through the weekend," according to the NWS.

"Gusts should peak between 45 and 65 mph ... , with minimum humidities between 8 and 15percent on Thursday, and 5 and 10 percent on Friday through Sunday."

Forecasters said red flag warnings could be issued in the Los Angeles area as early as Wednesday evening, potentially continuing through Friday or Saturday.

"There is a chance for red flag conditions to persist through as late as Tuesday as the dry air persists, but there remains a lot of uncertainty in the wind projections," according to the NWS.

The fire weather watch will affect the San Fernando and Santa Clarita valleys and the Santa Monica Mountains Recreational Area.

The wind event will again raise the possibility of power outages.

Southern California Edison warned Tuesday that some customers could be subject to Public Safety Power Shutoffs, in which electricity is cut in particularly wind-affected areas to prevent equipment damage that could spark fires.

"We understand that having your power turned off is a hardship, especially in the middle of a pandemic and when most folks are at home. We are working to limit the number of customers who are shutoff due to Public Safety Power Shutoffs," Vik Trehan, SCE director and incident commander, said in a statement.

"We know this is especially difficult for customers who lost power due to PSPS over the Thanksgiving holiday and who live in areas with high winds and increased wildfire threats. These PSPS are initiated to reduce the risk of wildfires and to protect communities from wildfire danger."

Residents can get more information about the shutoffs, and determineif they are in an area being considered for power cuts, by visiting www.sce.com/psps.