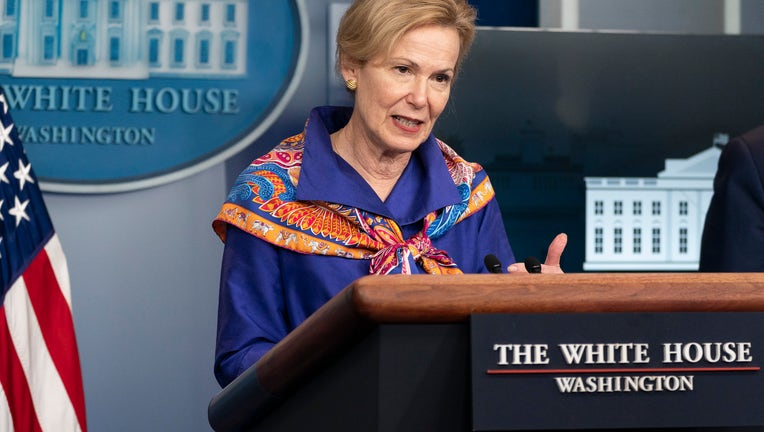 As California is battered by a new wave of coronavirus infections, hospitalizations, and, in turn, restrictions, Dr. Deborah Birx, coordinator of the White House Coronavirus Task Force, spoke with FOX 11’s Elex Michaelson about the state’s new health orders, as well as their scientific efficacy.

For context, starting Saturday, November 21, Governor Gavin Newsom has ordered a nightly curfew between the hours of 10 p.m. and 5 a.m. in those counties in the state’s restrictive “purple tier.” The orders, which limit nonessential work and gatherings, will impact some 94% of the state’s residents.

RELATED: Newsom imposes curfew on most of California as COVID-19 cases surge

The orders in some counties, including Los Angeles County, are more restrictive.

Already home to more than 1 million coronavirus cases, the new orders come after California logged a record 13,000 new infections on Thursday alone, and data reveals hospitalizations are up some 64% in the past two weeks, ICU admissions up 40.5% in the same period.

“I don’t ever second guess a Governor,” Dr. Birx said. “I’ve been to 42 states now, talking to Governors and Mayors, and it’s really important, Governors know their unique situations in their states. I’m always happy to provide advice on what we’re seeing, but we’re seeing significant spread throughout California and something needs to be done now.”

Dr. Birx further pointed to actions taken over the summer in many states, namely mask mandates, bar and indoor dining closures, and restrictions on community gatherings, as effective tools that demonstrate what has worked and what may work again.

Michaelson pressed Dr. Birx on curfews specifically, noting that many critics claim that with businesses closed, the new order may result in more unregulated gatherings that could cause further spread.

“In Miami, they had [a curfew] because they continued to have spread despite closing the bars and closing indoor dining,” Dr. Birx responded. “But then they realized that where that spread was happening was in personal gatherings, households, and communities, and families getting together, and they weren’t taking precautions, so they had their masks off, and that was the source of significant community spread.”

As more is learned about the virus, and how to treat it, Dr. Birx also hinted that the scientific data may not support keeping students, of all ages, out of the classroom.

“What we’ve learned through the fall in the colleges, the universities, and K-12 schools that opened, that the in-physical classrooms with masks on was a safe environment,” Dr. Birx said.

Having traveled to some 30 universities in recent months, she further applauded students for adhering to masking guidelines, and university presidents for not only taking the risk to reopen but for doing so by creating safe environments that have protected faculty and students, yielding no additional classroom spread.

She added that increased testing measures enacted on college campuses can serve as a model for “proactive public health intervention” at the state level as well.

Despite Dr. Birx’s claim of classroom safety, this week saw the indefinite closure of the New York City public school system, the largest in the nation. The nation’s second-largest school district, the LAUSD, has yet to reopen physical campuses since they closed last spring, with January 2021 now eyed as the earliest possible return date for in-person learning.

Ultimately, as California, and the nation, endure a new wave of the virus, Dr. Birx emphasized the need for personal responsibility.

In a wide-ranging interview on The Issue Is, Dr. Birx also discussed vaccine progress, including two other potential candidates from Johnson & Johnson and AstraZeneca, the continued use of masks and physical distancing during the holidays, and the fact that she has yet to communicate with President-Elect Joe Biden’s transition team.