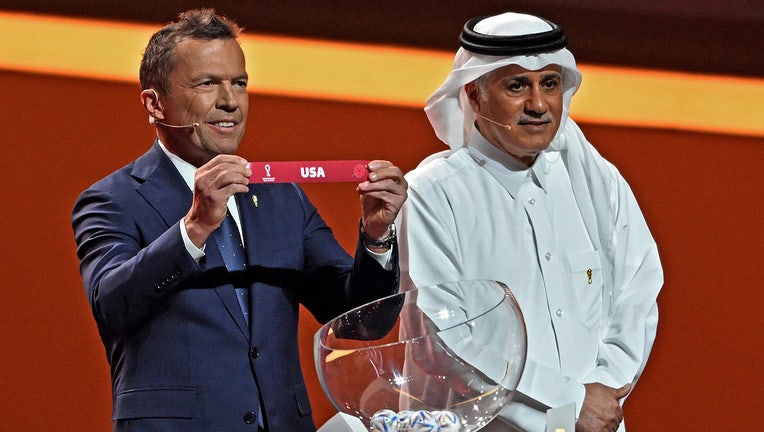 Former German footballer Lothar Matthaus holds the card showing the name of the USA during the draw for the 2022 World Cup in Qatar at the Doha Exhibition and Convention Center on April 1, 2022. (Photo by FRANCOIS-XAVIER MARIT/AFP via Getty Images)

The United States will open its return to the World Cup against the winner of a European playoff among Ukraine, Wales and Scotland, then face England and Iran in high-profile rematches of games played during tournaments of the past quarter-century.

The 15th-ranked Americans were drawn Friday to start against the European playoff winner on Nov. 21, the tournament's opening day in Qatar. The U.S. plays No. 5 England on Nov. 25 and closes the group stage against No. 21 Iran on Nov. 29.

No. 39 Scotland hosts 27th-ranked Ukraine in June in a playoff delayed from March because of Russia’s attack on Ukraine. A few days later, the winner goes to No. 18 Wales, which advanced last week with a 2-1 win over Austria.

"Three strong teams," Berhalter said. "Two pretty similar with Wales and Scotland and then one different with Ukraine. So we're going to have to be preparing for all three."

European club matches are scheduled for Nov. 12 and 13, so Nov. 15 is likely the first day Berhalter will have his entire roster available ahead of the opener.

"That's the negative, is that you have very little time to prepare," Berhalter said. "Guys will come over. They will have been playing on the weekend, and we'll get them literally a week before the World Cup, and that's a challenge. On the positive side, if we advance, you get a little bit more rest as you head into the next phase."

If the U.S. advances, it would play in the round of 16 on Dec. 3 or 4 against Ecuador, Netherlands, Qatar or Senegal. 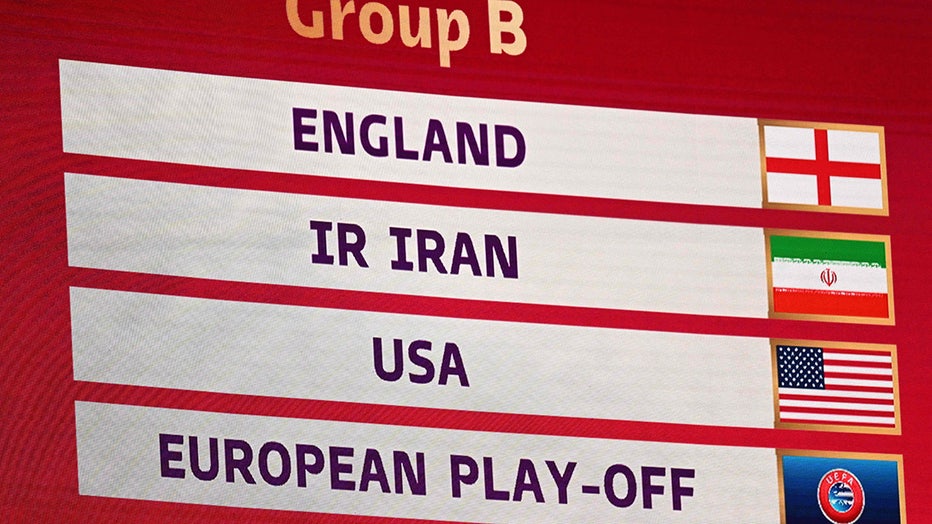 Group B nations are displayed during the draw for the 2022 World Cup in Qatar at the Doha Exhibition and Convention Center on April 1, 2022. (Photo by FRANCOIS-XAVIER MARIT/AFP via Getty Images)

In the group stage of the 1950 World Cup, the U.S. famously upset England 1-0 at Belo Horizonte, Brazil, behind Joe Gaetjens' 38th-minute goal. The Americans opened the 2010 tournament with a 1-1 draw against the Three Lions in South Africa. Steven Gerrard put England ahead in the fourth minute at Rustenberg, but Clint Dempsey tied the score in the 40th when his 25-yard shot skipped off the grass twice and bounced in off Robert Green’s hand.

"With England, it’s always an exciting game. There's always a lot of attention around that game," Berhalter said. "We're familiar with a lot of their players."

Iran upset the U.S. 2-1 at the 1998 World Cup in France, eliminating the Americans after their second game of the tournament. Hamid Estili scored in the 40th minute and Mehdi Mahdavikia in the 84th at Lyon, and current U.S. men's national team general manager Brian McBride scored in the 87th.

This year's World Cup is the first to be moved from its traditional June/July period, a shift to get away from the summer heat in the desert. As a result, the tournament will be played in the middle of European club seasons and overlap with the NFL and college football seasons in the U.S.

Since losing to Germany in the 2002 quarterfinals, the U.S. was eliminated in the group stage in 2006 and the round of 16 in 2010, both times by Ghana, and the Americans exited the 2014 tournament with an extra-time loss to Belgium in the round of 16. The U.S. failed to qualify for the 2018 tournament.