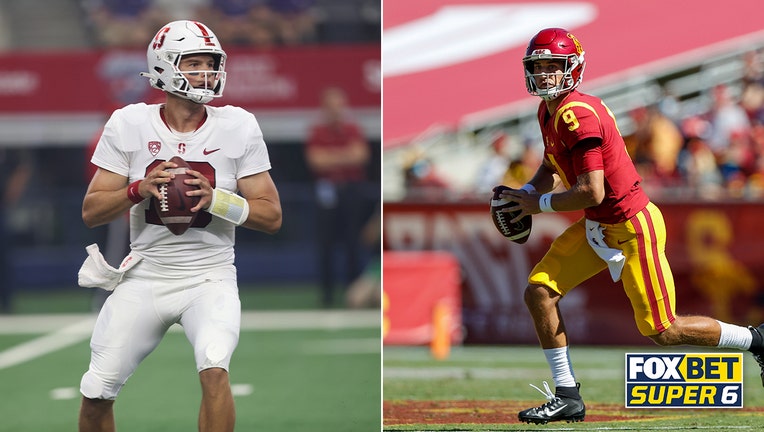 Great finishes. Heavyweight matchups. Packed crowds. All of that highlighted the first full weekend of the college football season.

It was a heck of an opener. And while the second week may not have the big matchups as Week 1, there’s plenty of intrigue and drama on the way.

Oregon and Ohio State are matching up in Columbus. The Battle of Iowa has bragging rights and a potential place in the national race on the line. Stanford and USC are looking to make their mark in the Pac-12. All highlight the schedule.

For more up-to-date news on all things college football, click here to register for alerts on the FOX Sports app!

And Saturday is another chance to win with FOX Bet Super 6. Pick the winners of all six marquee games with their margins of victory, and you could win the grand prize of $25,000. It’s fast, and it’s free, and all it takes is downloading the FOX Super 6 app on your phone or mobile device.

If you believe that college football is going to be a three-horse race this year, then here’s your chance to upset the apple cart. For Oregon and the Pac-12, this is about respect and perhaps having its only crack to get into the four-team playoff. However, remember that Ohio State has won 23 straight at the Horseshoe. No Pac-12 team has gone into Columbus and won since USC did it in 2009. Plus, there’s the main factor: The Buckeyes are better. By a lot.

Fifth in the nation and third in their conference. That’s Texas A&M’s standing in the SEC behind defending National Champion Alabama and No. 2 Georgia. In last week’s 41-10 victory over Kent State, the Aggies put up 595 total yards of offense. Devon Achane had 124 yards and two touchdowns to lead the A&M attack. Running back Jarek Broussard will need a big day to keep the Buffaloes close.

This is a game with huge national implications. The Cyclones are one of those programs that is always lurking but doesn’t get its proper respect as a national program. This is not going to be a flashy game – neither quarterback will throw for 300 yards, no running back will likely break 120 yards and the time of possession may end up being the biggest factor in this tug of war. In that case, take the home team.

The first regular-season meeting between the future SEC opponents since 2008 takes place in Fayetteville. The Longhorns opened the Steve Sarkisian era with an impressive 38-18 win over Louisiana last week in Austin. Bijan Robinson had a 100-yard rushing game along with a touchdown for Texas. The Razorbacks were pushed by Rice and got booed in their own stadium before rallying from a 10-point deficit for a 38-17 win. Arkansas quarterback KJ Jefferson is a dual-threat, but he needs a more prolific passing attack to keep the Hogs from getting slaughtered.

Primetime at the Big House for two teams that can’t afford to slip up. Washington was stunned at home by Montana last week to become the first ranked team to lose to an FCS opponent in five years. Michigan was able to pound on Western Michigan but lost leading receiver Ronnie Bell for the season with a knee injury. Blake Corum will carry a ton of the load for the Wolverines. Nothing at Michigan has felt normal for the past few years. A win here would help establish a norm.

The Pac-12’s marquee meeting in the Coliseum took a hit after Stanford was humbled by Kansas State 24-7 last week. The Trojans cruised over San Jose State 30-7 thanks to Kedon Slovis’ 256 yards passing and two touchdowns, with 137 yards of that going to Drake London. The old rivals will get to meet up for the first time in two years. It will be passionate and it will be fun.

Download the FOX Super 6 app now to predict the outcomes of the biggest events in sports, and you could win thousands of dollars absolutely for free each and every week. Just download and play!