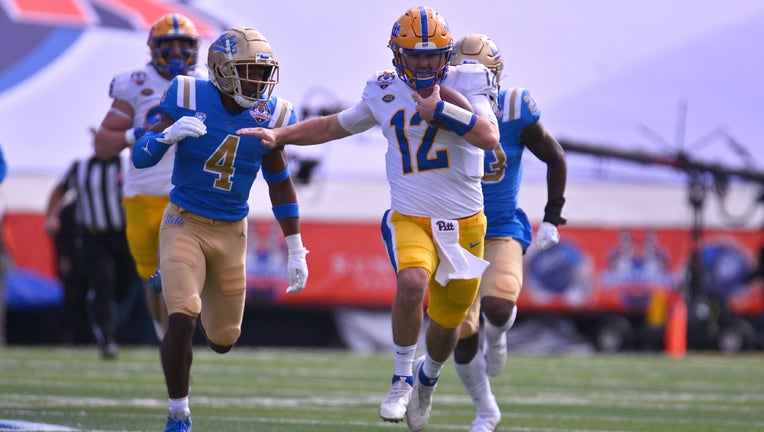 Quarterback Nick Patti #12 of the Pittsburgh Panthers runs for yardage against defensive back Stephan Blaylock #4 of the UCLA Bruins during the first half of the Tony the Tiger Sun Bowl game at Sun Bowl Stadium on December 30, 2022. (Photo by Sam Was (Getty Images)

The Panthers (9-4), playing without five starters who opted out of the game, took advantage of five UCLA turnovers, including four interceptions.

UCLA (9-4) scored what appeared to be the game-winning touchdown on an 8-yard run by T.J. Harden with 34 seconds remaining. That capped a drive that started at the UCLA 25-yard line with less than two minutes left, and was keyed by a 34-yard run by Harden.

Pitt quarterback Nick Patti got completions of 18 and 17 yards to Jared Wayne and Bub Means on the ensuing drive. After spiking the ball to stop the clock, Patti scrambled for 11 yards to the UCLA 29-yard line. After another spike with 10 seconds left, Sauls came on to kick the game-winner, which sailed through the uprights with just four seconds remaining.

Sophomore Rodney Hammond Jr. rushed for 89 yards and two scores to lead the Panthers, who were without running back Israel Abanikanda, the nation’s leader in total TDs with 22.

The Bruins, who had led 21-14 at the half, played without star senior running back Zach Charbonnet.

UCLA senior quarterback Dorian Thompson-Robinson, who was injured and didn’t return to the game after throwing an interception early in the fourth quarter, threw for 271 yards on 16 of 24 passing with three interceptions. Backup Ethan Garbers also threw an interception on the game’s final play.

Pitt got picks from Tylar Wiltz, Javon McIntyre, Bengally Kamara and M.J. Devonshire, and added a fumble recovery on a kickoff from Solomon DeShields.