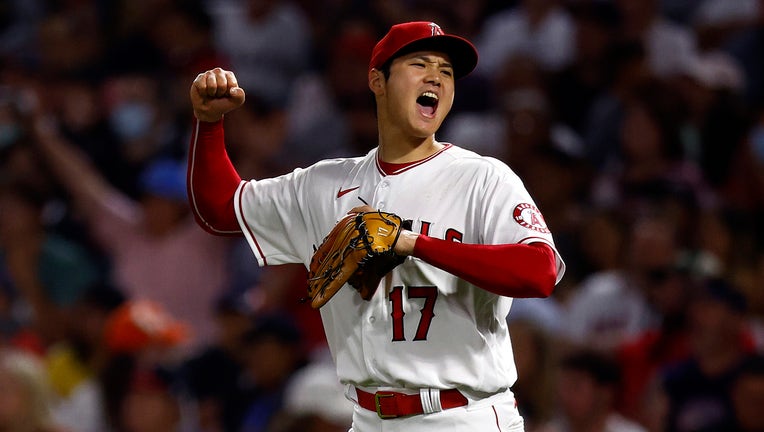 ANAHEIM, CALIFORNIA - JUNE 09: Shohei Ohtani #17 of the Los Angeles Angels celebrates the third out in the sixth inning against the Boston Red Sox at Angel Stadium of Anaheim on June 09, 2022 in Anaheim, California. (Photo by Ronald Martinez/Getty Im

Andrew Velazquez added a three-run homer in the sixth, but the Angels ended the longest skid in franchise history squarely on the shoulders of their matchless AL MVP, both on the mound and at the plate.

Ohtani (4-4) yielded four hits and a run while striking out six in a performance befitting an ace. He also had two hits, and he put the Angels ahead for the first time by crushing his 12th homer of the season off Nick Pivetta (5-5) in the fifth inning.

Los Angeles won for the first time since May 24 and for the first time under interim manager Phil Nevin, who replaced the fired Joe Maddon after Monday’s series-opening loss. The Halos won for only the fourth time in 22 games since May 15, when they were 24-13 and in first place in the AL West.

Alex Verdugo had an RBI single in the eighth for the Red Sox, whose seven-game winning streak ended with their first loss in the first two stops of their 10-game West Coast road trip. Boston has still won 16 of 22 overall.

Pivetta struck out 11 to match the most by a Boston pitcher this season while yielding six hits and two walks.

Ohtani was sharp on the mound after struggling in his two previous starts, notably ending the third inning by striking out Rafael Devers with a 101-mph fastball — the third-fastest pitch of his career and his fastest strikeout pitch ever. He induced 18 swings and misses after getting just three in his previous start against the Yankees last week.

The Angels had a lead after the sixth inning for the seventh time in the past 15 games, but their inconsistent bullpen hung on to this advantage after Ohtani finished his start with two strikeouts in the seventh.

Ryan Tepera yielded two hits and a run in the eighth, and Raisel Iglesias threw a perfect ninth for his 12th save.

The Angels got an improbable contribution from Velazquez, who ended his 0-for-22 slump with a two-out shot off Hirokazu Sawamura into the elevated right field stands. Sawamura inherited a two-on, nobody-out jam and nearly escaped before Los Angeles’ light-hitting shortstop came through with his first hit of June.

Ohtani barely avoided being hit by Franchy Cordero’s broken bat in the second inning. Velazquez fielded the resulting grounder and made a poor throw home, but Max Stassi fielded the bounce and tagged out Verdugo to keep the game scoreless.

Red Sox: Reliever Hansel Robles pitched a 1-2-3 eighth inning in his return from the injured list after sitting out two weeks with back spasms. Robles recorded 26 saves during parts of three seasons with the Angels, including an outstanding campaign in 2019 and a terrible one in 2020, leading to his departure. ... Nathan Eovaldi had discomfort in his right hip Wednesday during his five-inning start, but manager Alex Cora expects him to make his next start on schedule.

Red Sox: After a late-night flight up the coast, Rich Hill (2-3, 4.40 ERA) takes the mound Friday to open a three-game series in Seattle.

Angels: Tylor Megill (4-2, 4.41 ERA) takes the mound for the Mets on Friday when New York opens a three-game weekend series at the Big A. Los Angeles hasn’t announced a starter, but is expect to recall someone from the minors.