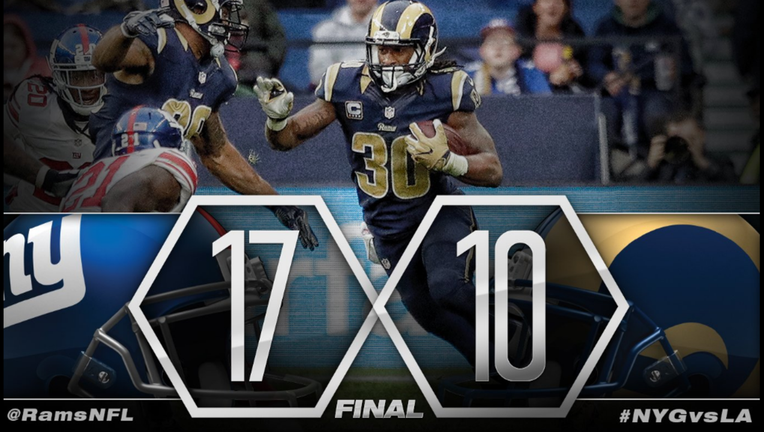 Keenum, coming off the best start of his career, had the Rams at the Giants 15-yard line with 50 seconds left when he lobbed a pass in the left corner of the end zone that Dominique Rodgers-Cromartie picked off. His intended target, Brian Quick, had broken off his route.

The win kept the Giants (4-3) in good shape in the ultra-competitive NFC East, where no one has a losing record. The Rams (3-4) lost their third in a row.

The Giants entered Sunday with the worst turnover differential in the NFC at minus-10. That became -11 on their second play from scrimmage as tight end Larry Donnell coughed up the ball on the Giants 35, leading to the Rams' lone touchdown, a 10-yard grab by Tavon Austin.

But the Rams were unable to build on that early edge and instead hit the self-destruct button. Keenum threw two interceptions, both off high-sailing deflections, to safety Landon Collins, and two more in the end zone to cornerback Rodgers-Cromartie.

Collins returned his first pick 44 yards for a second-quarter touchdown, running from right to left across the field and making several Rams miss tackles before he bowled over center Tim Barnes to draw the Giants even.

Collins' second pick set up the winning drive, which featured a 22-yard catch by Odell Beckman to the Rams 6. Rashad Jennings from the 1.

The Rams' final two possessions ended in the end-zone interceptions by Rodgers-Cromartie, the pro-Giants crowd of more than 74,000 roaring their approval.

The Giants took the field looking jet-lagged, Rams the savvy travelers. That perhaps reflected the fact Los Angeles chose to fly overnight from Detroit the previous Sunday for a full week in England, while the Giants did most of their preparations at home before arriving Friday in London.

The Giants gained a single first down in the first quarter on an 11-yard completion to Sterling Shepard. The Rams, by contrast, controlled 11:36 of the first-quarter clock, gained seven first downs with a balanced attack, and scored on their first two drives to lead 10-0 with less than 10 minutes gone.

New York struggled for a seventh straight week to move the ball on the ground, frequently attempting ineffective draw plays from shotgun formation straight into Aaron Donald's turf. The Rams' run defense was stout up the middle despite the absence of Michael Brockers (thigh injury).

The Giants finished with 36 yards rushing.

Austin rightly celebrated scoring the opening TD, but much of his game was a head-scratcher. He fumbled twice, one out of bounds after a catch, one on an ill-advised punt return that he recovered -- and his butterfingered catch attempt gift-wrapped Collins' interception. He also fair-caught another punt inside the Rams 5.

Giants kick returner Dwayne Harris suffered what looked like a serious injury when returning the final punt of the first half. He lay still on the ground for several minutes, was immobilized and carted off the field as teammates prayed. But he returned to field the first punt of the fourth quarter. Neither team reported any other serious injuries.