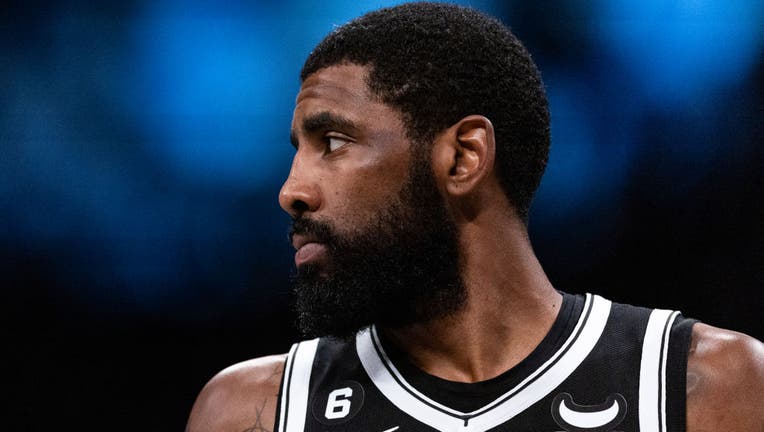 Kyrie Irving #11 of the Brooklyn Nets looks on during a break in the action during the first quarter of the game of the Chicago Bulls at Barclays Center on November 01, 2022. (Photo by Dustin Satloff/Getty Images) (Getty Images)

NEW YORK (KTTV) - NBA star Kyrie Irving will face suspension after he shared a link to the movie, "Hebrews to Negroes: Wake Up Black America" to his social media page.

The Brooklyn Nets are expected to suspend Irving for at least five games, according to a statement released by the team.

Last week, Irving was at the center of controversy after tweeting a link to the movie that many consider antisemitic. On Wednesday, Irving and the Nets each pledged to donate $500,000 toward organizations pushing to eradicate hate.

"I oppose all forms of hatred and oppression and stand strong with communities that are marginalized and impacted every day," Irving said in a joint statement with the Nets and Anti-Defamation League earlier in the week. "I am aware of the negative impact of my post towards the Jewish community and I take responsibility."

On Thursday, the Nets slammed Irving in a statement, saying the team was "dismayed" the star guard did not explicitly tell the media he has no antisemitic beliefs.

"Such failure to disavow antisemitism when given a clear opportunity to do so is deeply disturbing, is against the values of our organization, and constitutes conduct detrimental to the team," Nets said in a statement.

The Nets did not specify when the team expects to bring Irving back.