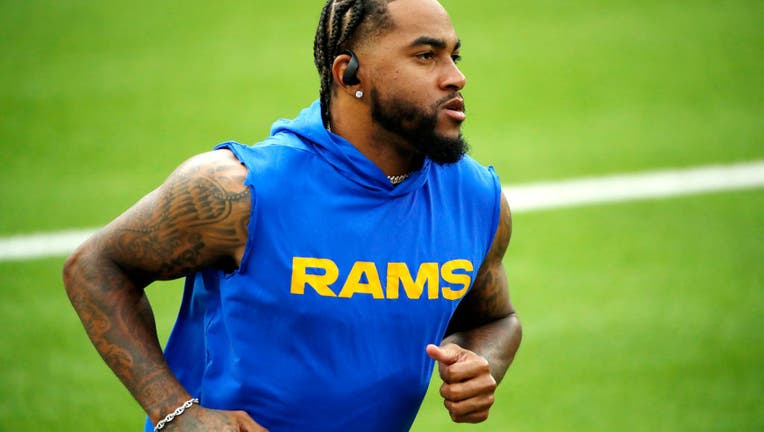 INGLEWOOD, CALIFORNIA - OCTOBER 24: DeSean Jackson #1 of the Los Angeles Rams warms up prior to the game against the Detroit Lions at SoFi Stadium on October 24, 2021 in Inglewood, California. (Photo by Katelyn Mulcahy/Getty Images)

LOS ANGELES - DeSean Jackson and the Los Angeles Rams are trying to find a trade partner for the veteran receiver, who is frustrated by his lack of playing time after just seven games with his hometown team.

Coach Sean McVay said Friday the Rams (6-1) are allowing the 34-year-old Jackson to look for a new team. Jackson, who signed a one-year deal with Los Angeles, won’t play Sunday when the Rams visit Houston (1-6).

"We are allowing him to be able to look into some options for himself," McVay said. "What it boils down to is, I think, opportunities that he’s deserving of, and some of the circumstances that surround it."

Jackson has eight catches for 221 yards and one touchdown this season with the Rams. He has been targeted just 15 times, and he has played only 100 offensive snaps — just 22% of the Rams’ plays.

"This hasn’t exactly been probably what he envisioned," said McVay, who coached Jackson earlier in their careers as Washington’s offensive coordinator.

The Rams signed Jackson to be the speedy deep threat their offense clearly needed last season, and he has filled that role when McVay puts him on the field. Jackson caught a 75-yard touchdown pass earlier this season, and three of his eight grabs have gone for at least 20 yards.

But Jackson has ceded most of his potential playing time to second-year pro Van Jefferson, who has stepped up with 21 catches for 304 yards and three touchdowns while playing 74% of the Rams’ snaps.

McVay indicated he had only recently learned about Jackson’s disappointment, calling the trade explorations "a quickly developing situation."

"I think he’s a tremendous player that has a great track record and resume," McVay added. "With all the circumstances surrounding that, (we) want to be able to be open-minded. ... I think he deserves an opportunity to be able to see if there’s better options out there for him."

If Jackson leaves, the Rams don’t have a proven replacement for even his minor role. Receiver Tutu Atwell, the Rams’ eyebrow-raising choice in the second round last spring, has played only 10 offensive snaps, and McVay has asked the rookie for an increased sense of urgency in practice.

The Rams haven’t needed Jackson much to generate explosive plays this season with new quarterback Matthew Stafford leading a revitalized passing game. All four of their top receivers are averaging at least 12.1 yards per catch, and Stafford is second in the league with 19 touchdown passes.