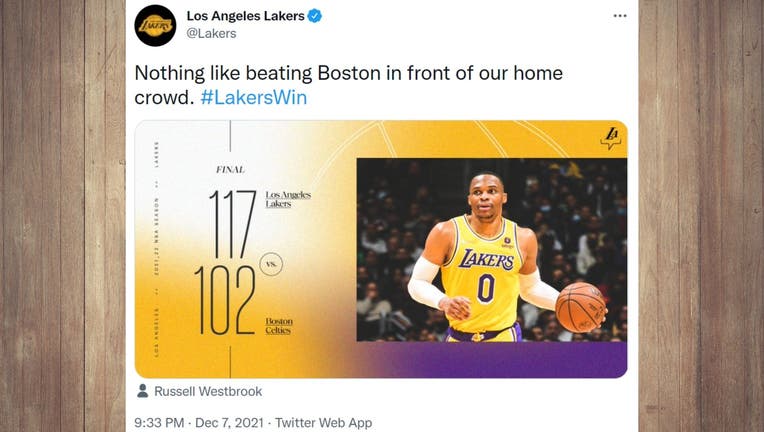 Anthony Davis had 17 points and 16 rebounds for the Lakers, who produced one of their best recent performances in their fourth victory in six games overall. With James and Westbrook playing dominant floor games, Los Angeles made 56.5% of its shots in the first three quarters and throttled Jayson Tatum’s supporting cast defensively.

Tatum scored 14 of his 34 points in an incredible first-quarter blitz for the Celtics, who dropped to 1-2 on their four-game West Coast road trip. Jaylen Brown sat out his third straight game with a strained right hamstring, and nobody else managed more than Robert Williams III’s 13 points for Boston.

The Lakers got a much-needed uneventful victory in the 296th edition of the matchup between venerable franchises with a record 17 championships apiece and a record 12 NBA Finals meetings. Boston and Los Angeles split their season series 1-1 for the fifth straight campaign after the Celtics beat the Lakers last month behind Tatum’s 37 points.

Westbrook staked the Lakers to a 19-point lead in the third by scoring 15 points in the quarter, and Dwight Howard’s tip-in put them up 101-81 with 9:12 to play. The Lakers have lost seven games this season in which they held a double-digit lead, but Boston never applied fourth-quarter pressure in this one.

Tatum scored Boston’s first 14 points in the first 3:49, hitting four 3-pointers among his five shots without a miss. James kept the Lakers close with 16 points in the first quarter, and his assist to Westbrook right before the buzzer put Los Angeles up 60-55 at halftime.

Celtics: Bruno Fernando was inactive after feeling lower back spasms at their morning shootaround. ... Jabari Parker stayed at the team hotel with a non-COVID-19 illness. ... Romeo Langford played 16 minutes after missing Boston’s last game with a sprained right ankle. Coach Ime Udoka said pregame his playing time would be based on pain tolerance.

Lakers: Carmelo Anthony scored nine points. He was questionable earlier in the day after he fell ill, but the designation was removed later in the day. ... Malik Monk had a show-stopping breakaway dunk among his 10 points.

Dennis Schröder struggled for the Celtics, scoring 10 points on 1-for-6 shooting before sitting out in the fourth quarter. He was also booed regularly in the first half by Lakers fans still insulted by the German guard’s handling of his free agency after his sole season with Los Angeles.

Schröder turned down an $84 million, four-year contract offer from the Lakers to test the market last summer, but he was forced to settle for a $5.9 million, one-year deal with Boston after finding nothing near the Lakers’ offer. Los Angeles also lost out because it traded Danny Green and a first-round pick to get Schröder.

Celtics: At the Los Angeles Clippers on Wednesday night.

Lakers: At Memphis on Thursday night.