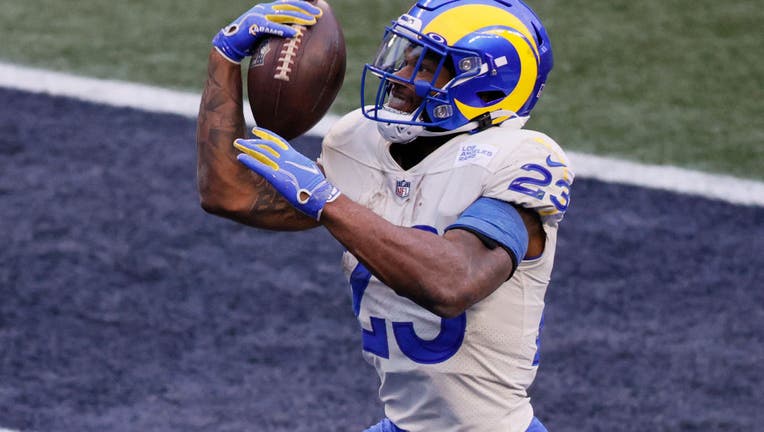 SEATTLE, WASHINGTON - JANUARY 09: Running back Cam Akers #23 of the Los Angeles Rams celebrates after rushing for a touchdown during the second quarter of the NFC Wild Card Playoff game against the Seattle Seahawks at Lumen Field on January 09, 2021

SEATTLE, Wash. - The Los Angeles Rams have ended Seattle's 10-game home winning streak in the playoffs Saturday with a 30-20 wild card win punctuated by five sacks and a pick-6 of Russell Wilson.

The third-seeded Seahawks pulled to 30-20 with 2:28 remaining on DK Metcalf's second touchdown catch of the game. But the Rams recovered the ensuing onside kick.

The win may have been costly: The Rams suffered key injuries to quarterback John Wolford, star Aaron Donald and receiver Cooper Kupp.

Wolford started but injured his neck in the fist quarter. And Jared Goff was pressed into duty less than two weeks since he had three pins surgically inserted into his broken right thumb.

Donald suffered a rib injury on a tackle of Russell Wilson after collecting two sacks and Kupp limped into the locker room after injuring his right knee in the closing minutes.

The Seahawks last lost a home playoff game in 2004 when they were beaten 27-20 by the then-St. Louis Rams.

7:50 p.m.: The Los Angeles Rams have taken a commanding 30-13 lead with less than five minutes remaining in their wild card game at Seattle on a Jared Goff-to-Robert Woods 15-yard touchdown pass.   The Rams are on the verge of handing the Seahawks their first playoff loss at home since 2004. The Seahawks have won 10 consecutive home playoff games.

The Seahawks have struggled against the league's best defense, converting just 1 of 11 third downs and turning the ball over twice, both of which led to Rams touchdowns.

7:25 p.m.: The Los Angeles Rams are leading the Seattle Seahawks 23-13 early in the fourth quarter. But the Rams are without star Aaron Donald and quarterback John Wolford.

Donald has a rib injury and Wolford was taken via ambulance to a hospital after injuring his neck in the first half.  Wolford's injury pressed Jared Goff into the game just 12 days after he had three pins inserted into his right thumb that was broken in a Week 16 loss at Seattle.

Matt Gay's 36-yard field goal with 11:33 remaining put the Rams ahead by 10 in their quest to hand Seattle its first home playoff loss since 2004.

7 p.m.:  Rams defensive star Aaron Donald is questionable to return with a rib injury he suffered when he tackled Seattle quarterback Russell Wilson in the third quarter of the NFC wild card opener at Seattle.

Donald appeared to be grabbing at his abdomen and after being checked briefly on the sideline walked to the locker room with athletic trainers.  Donald had three tackles and two sacks prior to getting hurt.

Led by Donald, the Rams led the league in several defensive categories in 2020. They allowed the fewest points per game at 18.5 and the fewest yards per game at 281.9. They also had the second-most sacks in the NFL this season with 53.

The Rams lead the Seahawks 20-13 with 8:25 remaining in the third quarter.

6:30 p.m.: Rams quarterback John Wolford has been transported to a hospital via ambulance for observation after injuring his neck in the NFC wild card opener at Seattle.  Wolford was injured on a hit by safety Jamal Adams on a designed run in the first quarter.

Wolford got the start because Jared Goff was just 12 days removed from thumb surgery on his throwing hand after breaking it at Seattle in Week 16.  Goff hasn't been very effective but the Rams got a pick-6 from Darious Williams and a big first half from rookie running back Cam Akers, who rushed for 97 yards and had another 45 yards receiving.

The Rams lead 20-10 at the break. They are 36-0 when leading at the half in coach Sean McVay's four seasons.

6:15 p.m.: The Los Angeles Rams have taken a 20-10 halftime lead over the Seahawks in their wild card game at Seattle. Cam Akers' 5-yard touchdown run with 1:57 left in the first half ended the Rams' streak of eight trips into the red zone without a touchdown. It was also the Rams' first offensive touchdown. Their other one came courtesy of Darious Williams' pick-6 of Russell Wilson, which was the Rams' fifth defensive score of the season.

The Seahawks have won their last 10 home playoff games, but their famous earsplitting 12th Man crowd is absent because of the coronavirus pandemic.

The Seahawks will receive the second-half kickoff.

6 p.m.: Seattle quarterback Russell Wilson threw a 51-yard touchdown pass to D.K. Metcalf to cut the Los Angles Rams' lead to 13-10 in the second quarter of their wild card game.  On Seattle's previous possession, Wilson threw a pick-6 to Darious Williams, who picked him off twice in Week 10.

Williams returned the interception 42 yards for the game's first touchdown. Matt Gay has two field goals for the Rams and Jason Myers has one for Seattle.

5:30 p.m.: The Chicago Bears have ruled out leading tackler Roquan Smith and second-leading receiver Darnell Mooney for their wild card game against the New Orleans Saints on Sunday.

They were injured in the regular season finale against Green Bay and did not practice during the week. Smith injured his left elbow and Mooney suffered an ankle injury after setting career highs with 11 catches for 93 yards.

Smith's injury leaves the Bears without a disruptive force at inside linebacker and makes containing the Saints much more difficult, particularly with star running back Alvin Kamara activated after missing last week's win over Carolina because of COVID-19 concerns.

Smith had a career-high 139 tackles and ranked second in the league with 18 tackles for loss. The Bears also activated linebacker Manti Te'o and defensive back Marqui Christian from the practice squad on Saturday.

5:15 p.m.:  Quarterback Jared Goff has entered the Rams' wild card game at Seattle just 12 days removed from thumb surgery on his throwing hand.  Goff was pressed into duty when John Wolford was hit in the head on the Rams' second drive and went to the locker room to be evaluated for an injured neck.

Safety Jamal Adams lowered his shoulder and hit Wolford in the head after the backup quarterback gave himself up on a keeper. Wolford got the starting nod for the second straight week after Goff broke his right thumb when he hit a defender's helmet when the Rams played the Seahawks in Week 16.

The Rams' only other quarterback is Blake Bortles who is inactive.

4:40 p.m.: The NFC wild card weekend is underway with the Los Angeles Rams visiting the Seattle Seahawks and John Wolford is getting the start for the Rams with Jared Goff just 12 days removed from thumb surgery on his throwing hand.

The Seahawks are in the playoffs for the ninth time in 11 seasons under coach Pete Carroll and for the eighth time in quarterback Russell Wilson's nine-year career.

The Rams have been in the playoffs in three of coach Sean McVay's four seasons. The Seahawks won the NFC West at 12-4 and the Rams went 10-6 to secure a wild card berth. The teams split their regular season series with both teams winning at home.

4:30 p.m.: The Buffalo Bills have won a playoff game for the first time in 25 years. They held off Philip Rivers and the Indianapolis Colts 27-24 in the first of six wild card games this weekend.

After allowing two fourth-quarter touchdowns, the Bills defense stiffened in the final minute while the Colts were trying to into field goal range.  On fourth down from midfield, Rivers heaved a Hail Mary toward the goal line that was knocked down.

The NFL's expanded wild card weekend kicks off with the Buffalo Bills hosting a playoff game for the first time since 1996.

The Indianapolis Colts visit Buffalo in the first of three games Saturday. The Bills earned the No. 2 seed in the AFC's seven-team playoff field behind Kansas City.  That game will be followed by two NFC games: the Rams visit Seattle and Tom Brady leads the Tampa Bay Buccaneers against Washington.

Brady is making his 12th consecutive playoff appearance and the Buccaneers are making their first postseason appearance since 2007.

Washington won the middling NFC East despite a 7-9 record to earn a home wild card game. The Buccaneers are 11-5.