It's only Week 2 but LA Chargers fans were in midseason form cheering on the Bolts in the Week 2 showdown against division-rival Kansas City Chiefs.

Mahomes finished with 235 yards passing, and Jerick McKinnon and Justin Watson hauled in the TD passes for the Chiefs (2-0), who fell behind 10-0 in the first quarter and spent most of the game playing catch-up.

Jaylen Watson finally put the Chiefs ahead after the Chargers (1-1), answering Matt Ammendola’s tying field goal, marched to the Kansas City 3. Justin Herbert was eyeing tight end Gerald Everett when Watson, a seventh-round pick making his first start, stepped in front of the pass with 10:29 to go and ran nearly untouched the other way to the end zone.

Things became worse for the Chargers (1-1) two series later when Herbert was drilled by Mike Danna delivering a throw. He left the field clutching his side, returned one play later, then threw an incompletion that forced the Chargers to punt. 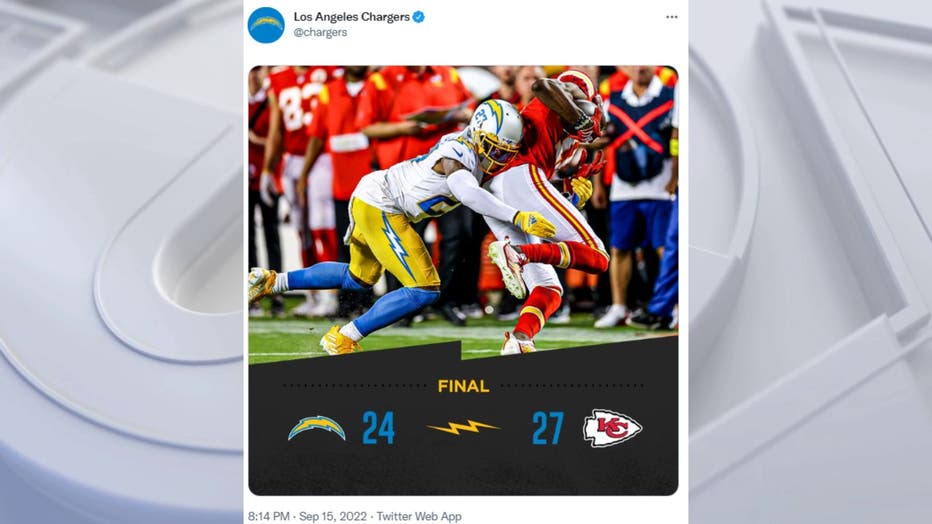 Clyde Edwards-Helaire promptly split the defense on a 52-yard run to set up a field goal for Kansas City.

Herbert, who finished with 334 yards and three touchdown passes, gamely tried to keep the Chargers alive. He threw a 36-yard dart on fourth down to extend their ensuing possession, then found Joshua Palmer in the back of the end zone on fourth-and-goal to pull Los Angeles within 27-24 with just over a minute to go.

Kansas City recovered the onside kick and ran out the clock on a crucial AFC West win.

The highly anticipated showdown between two of the league’s prolific young quarterbacks, each surrounded by premier playmakers, turned out early on to be a defensive slugfest.

The Chargers held the Chiefs to 13 yards in the first quarter, thanks to relentless pressure from Joey Bosa and Khalil Mack and the fact that Derwin James Jr. was just about everywhere, and kept a team that scored 44 points last week in Arizona off the scoreboard until Mahomes slung a sidearm pass to McKinnon early in the second quarter.

Staley finally went for it on fourth down on the opening drive of the second half. And one play after Austin Ekeler picked it up, Williams made a one-handed grab around Chiefs cornerback L’Jarius Sneed to give the Chargers a 17-7 lead.

The game appeared to be getting away from the Chiefs when Mahomes was intercepted by Asante Samuel Jr. on their next possession. But replays showed Samuel didn’t control the ball and the call was overturned, and Mahomes capitalized on his second chance by throwing a 41-yard strike to Justin Watson for a touchdown.

The Chiefs tied it 17-all on the first play of the fourth quarter when Ammendola, who was signed earlier this week to replace the injured Harrison Butker, knocked through a chip shot on fourth down at the goal line.

That set up Jaylen Watson’s pick-6 and the first lead that Kansas City had all night.

The game was the first in the $13 billion, 11-year deal between the NFL and Amazon Prime to exclusively stream Thursday night games. Amazon founder Jeff Bezos joined NFL Commissioner Roger Goodell on the sideline before kickoff.

The Chargers return home to face Jacksonville on Sept. 25. The Chiefs visit Indianapolis the same day.