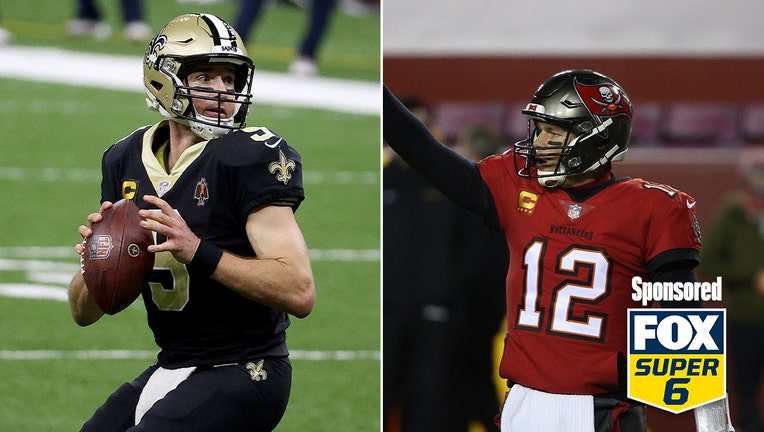 LEFT: Drew Brees #9 of the New Orleans Saints looks to throw a pass against the Chicago Bears during the fourth quarter in the NFC Wild Card Playoff game at Mercedes Benz Superdome on January 10, 2021 in New Orleans, Louisiana. (Photo by Chris Grayth

Tom Brady and Drew Brees have combined to symbolize the greatest era of offensive football in NFL history.

On Sunday, when Brady’s Tampa Bay Buccaneers head to New Orleans to play Brees’ Saints in the NFC Divisional playoff round (6:30 p.m., FOX), they could combine to win you a huge amount of cash and a new truck with FOX Super 6.

Predict the right answers to the six questions on this game and you could win $250,000 and a new Ford F-150 truck! It’s that simple. Just download the free FOX Super 6 app to play you could win the grand prize to start the New Year right. Could anything really be better than that?

Here are the questions and how to look at it:

The two are clearly Hall of Famers and both have shown moments this season where they can still fling it as well as anyone. This one will be primarily based on Brady’s numbers since Brees and the Saints have a better tactical running game. Still, it would be stunning to see these numbers not get into the low 50s at the least.

When you look at everybody that the Buccaneers have on offense- Rob Gronkowski, Michael Evans, Chris Godwin and Ronald Jones coming out of the backfield- it seems pretty safe to say that Tampa would appear to have the better argument on this one. Michael Thomas’ return should help New Orleans narrow the gap, however.

While Ronald Jones is not a bad back, Kamara is among the gold standards in running backs. New Orleans has averaged 141 yards per game- 6th best in the league during the regular season. The Bucs are averaging 94 – which is 28th.

The Buccaneers are the second-best team in the NFL during the regular season in average amount of pass yards with 297 per game. That’s a direct result of Bruce Ariens' style and preference, along with the weapons that Brady has been surrounded by. New Orleans has averaged 234 passing yards a game-- 19th in the NFL. Part of that is because Kamara can handle a ton of the load running. It’s also a reflection of not having Thomas for most of the season and Brees’ arm not being as strong as Brady’s at this point.

The Saints won the first two matchups with relative ease, but there’s something different about both teams. Brady looks a lot more comfortable within the Tampa Bay offense and has settled in with his bevy of weapons on the outside. On the flip side, the Saints have become a mainly defensive team with questions about the passing game because of the potential rustiness of Brees and Thomas. Throw the first two games out in the series, because they really don’t matter now.