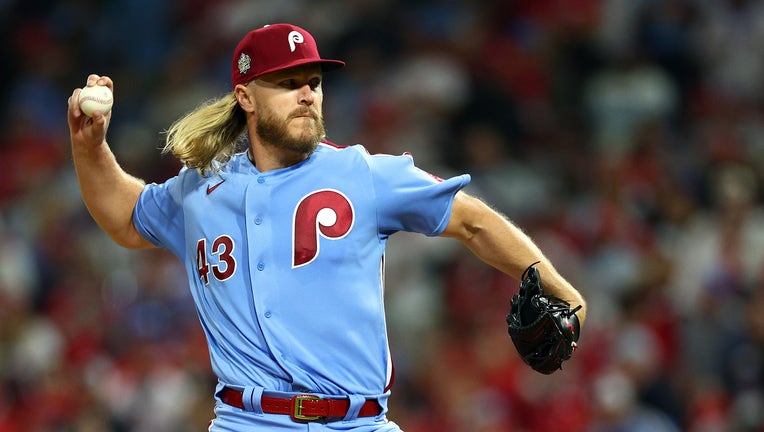 Noah Syndergaard #43 of the Philadelphia Phillies delivers a pitch against the Houston Astros during the fourth inning in Game Five of the 2022 World Series at Citizens Bank Park on November 03, 2022 in Philadelphia, Pennsylvania. (Photo by Elsa/Gett (Getty Images)

LOS ANGELES (AP) - Pitcher Noah Syndergaard and the Los Angeles Dodgers have agreed to a $13 million, one-year deal, a person familiar with the negotiations told The Associated Press.

The person spoke on condition of anonymity Wednesday because the agreement had not been announced.

The deal includes the opportunity to earn $1.5 million in performance bonuses.

Syndergaard began last season with the Los Angeles Angels, posting a 3.83 ERA and 64 strikeouts in 15 starts. The 30-year-old right-hander was traded to the Philadelphia Phillies in August and his numbers fell off. His ERA ballooned to 4.12 and he averaged 5.1 strikeouts per nine innings. He made nine starts in 10 appearances for the eventual World Series runners-up.

Syndergaard had Tommy John surgery in March 2020 before the season was postponed because of the COVID-19 pandemic. An injury setback delayed his return for the 2021 season before he made two relief appearances for the New York Mets late in the season.

The Dodgers have room in their rotation for Syndergaard because All-Star right-hander Walker Buehler is expected to miss all of next season after having Tommy John surgery. Free agents Tyler Anderson and Andrew Heaney signed elsewhere this offseason.

Syndergaard is seeking a return to some of the success he had with the New York Mets, where he pitched his first seven seasons and was an All-Star in 2016. He pitched for the Mets in the 2015 World Series, earning their only win of the series against the Kansas City Royals.

Feyereisen was designated for assignment a day earlier by the Rays. He was 4-0 with a 0.00 ERA in 22 games after missing the second half of last season with shoulder discomfort.

The 29-year-old right-hander has been in the major leagues for parts of three seasons with Milwaukee and the Rays. He has a career 2.31 ERA with an 8-4 record and 85 strikeouts in 83 games.

Belge has been with the Dodgers organization for three years. The 25-year-old was 3-3 with a 3.66 ERA and 50 strikeouts in 29 games for High-A Great Lakes last season.