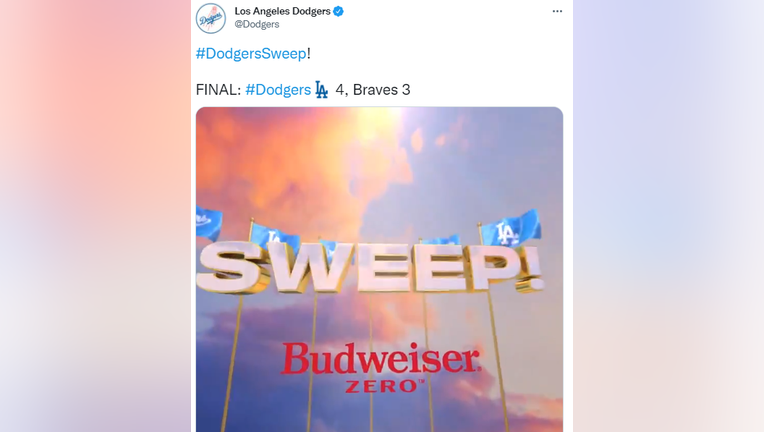 LOS ANGELES (AP) — Justin Turner and AJ Pollock singled home the tying and go-ahead runs through the same infield hole in the eighth inning, and the Los Angeles Dodgers rallied to beat the Atlanta Braves 4-3 on Wednesday night and complete a three-game sweep.

The Dodgers moved into sole possession of the NL West lead after the San Francisco Giants lost 5-2 to Milwaukee. Los Angeles hadn’t been in first place since April 25.

The Dodgers staked Max Scherzer to an early 2-0 lead and he was dominating the NL East-leading Braves when he left after 76 pitches. The right-hander struck out nine and walked none in six innings.

The Dodgers tied it at 3 on Turner’s single in the hole between third and shortstop, scoring Trea Turner, who doubled and took third on Max Muncy’s groundout.

Corey Seager followed with a walk against Chris Martin (2-4), putting Justin Turner on second with two outs. Pollock singled through the same hole as Justin Turner, who scored for a 4-3 lead.

Phil Bickford (3-1) got one out for the win. Joe Kelly pitched the ninth to earn his fifth career save.

Mookie Betts struck out four times for the second time this season.

The Braves lost their third in a row for the first time since a four-game skid from June 9-12. They also dropped their first road series since July 5-7 at Pittsburgh, and have lost seven in a row and 10 of 11 at Dodger Stadium.

Brusdar Graterol followed Scherzer and gave up three straight hits, including a single by Travis d’Arnaud, who scored on Eddie Rosario’s home run that tied it at 2 in the seventh.

Muncy slugged his 30th home run in the first off Max Fried. It’s the third time the first baseman has had 30 or more homers in a season. He tripled in the third.

Austin Barnes homered leading off the third to make it 2-0.

Scherzer retired 11 in a row after giving up a single to Freddie Freeman in the first.

The Braves put the potential tying runs on base in the fifth with singles by Rosario and Ehire Adrianza, but in a Max vs. Max matchup, Fried struck out swinging to end the inning.

Fried retired seven straight before walking Trea Turner leading off the sixth. He moved up on Fried’s wild pitch but Justin Turner lined out to second to end the inning.

Braves: 2B Ozzie Albies felt better than expected a day after fouling a pitch off his left knee and being carried off the field. He’ll be re-evaluated Thursday.

The Dodgers added right-hander Ryan Meisinger and infielder/outfielder Zach McKinstry to the active roster. Meisinger was claimed Tuesday from the Chicago Cubs. He went 0-0 with a 12.27 ERA and six strikeouts in seven games for them. McKinstry returns for his third stint with the team. He’s batting .217 with seven homers and 29 RBIs in 59 games for the Dodgers.