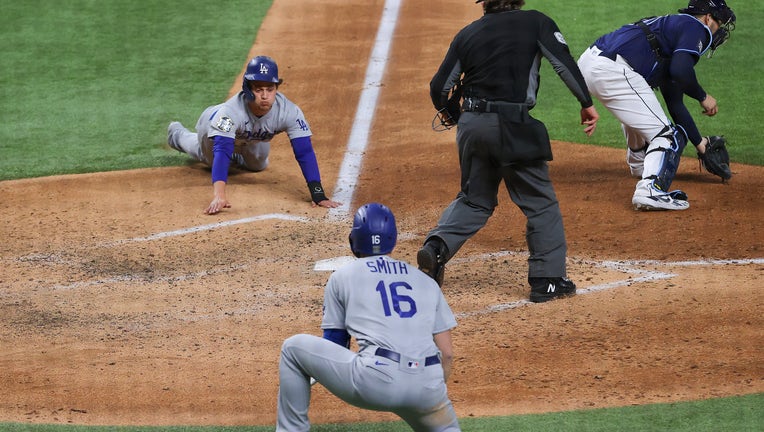 ARLINGTON, TEXAS - OCTOBER 24: Corey Seager #5 of the Los Angeles Dodgers slides into home plate safely with a run against the Tampa Bay Rays during the fifth inning in Game Four of the 2020 MLB World Series at Globe Life Field. (Photo by Tom Penning

LOS ANGELES - The Los Angeles Dodgers fell to the Tampa Bay Rays in a heartbreaking fashion in Game 4 of the World Series.

The LA Dodgers lose Game 4 on Saturday night. The fans in Arlington are heartbroken, but hopeful!

The Dodgers did not make things easy for themselves as they coughed up the lead multiple times over the course of the wild game Saturday night.

The Dodgers' Pedro Baez gave up a three-run home run to the Rays' Brandon Lowe in the sixth and then gave up another to Kevin Kiermaier, a solo shot, in the seventh. Los Angeles' Blake Treinen was responsible for one of the three runs scored by Lowe's homer.

And then, in the most frustrating way possible for Dodgers fans, Rays' Brett Phillips hit an RBI base hit with two outs in the bottom of the ninth inning, easily scoring Kiermaier and then a fielding error allowed Randy Arozarena to cross home plate to give Los Angeles the improbable loss.

Dodgers' longtime closer Kenley Jansen was responsible for the blown lead, and the loss, in the ninth.

Back in the first inning, Los Angeles' Justin Turner blasted a solo home run to center field to put the Dodgers on board 1-0.

At the top of the third, NLCS MVP Corey Seager blasted a moonshot to the right field stands to extend the Dodgers' lead to two runs. Seager's home run on Saturday night was his eighth in the 2020 postseason.

The Rays responded in the bottom of the fourth after Randy Arozarena hit a solo home run to put Tampa Bay on board in the fourth inning.

The Dodgers responded in the top of the fifth with an RBI single from Max Muncy to score Seager. In the following frame, Rays outfielder Hunter Renfroe blasted a solo home run to cut the Dodgers' lead to 3-2.

Enrique Hernandez's RBI double at the top of the 6th helped extend Los Angeles' lead to 4-2.

After trailing 5-4, Joc Pederson hit a line drive, two-run single that grazed through Lowe's glove to help the Dodgers briefly regain their lead to 6-5. Kiermaier's solo homer in the following frame once again wiped out the Dodgers' lead.

Seager added to his already-historic postseason run with a bloop RBI single to give Los Angeles a 7-6 lead at the top of the 8th inning.

Dodgers' Julio Urias delivered a relatively solid start for Los Angeles before being pulled from the mound in the fifth inning. The 24-year-old lefty struck out nine Rays hitters and allowed two earned runs in 4 2/3 innings.

Related: Taco Bell will deliver on their 'steal a base, steal a taco' promotion for World Series