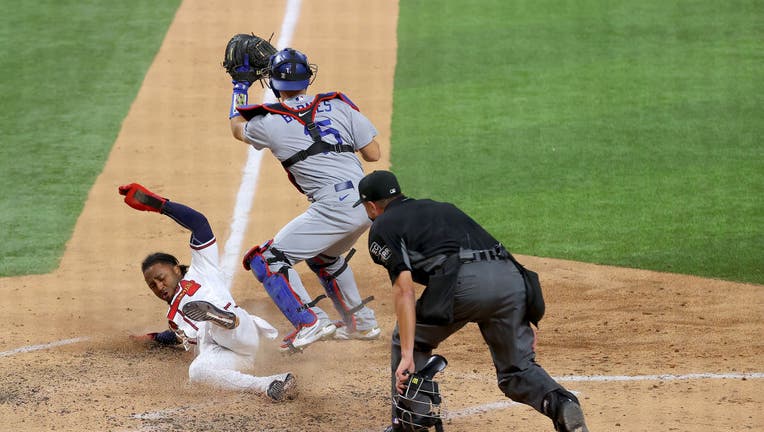 Ozzie Albies #1 of the Atlanta Braves comes home to score a run against the Los Angeles Dodgers during the sixth inning in Game Four of the National League Championship Series at Globe Life Field on October 15, 2020 in Arlington, Texas. (Photo by Tom

The Braves took a 3-1 lead in the NL Championship Series, bouncing back from getting pounded 15-3 the previous night. Atlanta will try to reach its first World Series since 1999 when it plays Game 5 Friday night.

Ozuna had four hits and drove in four runs. It was 1-all in the sixth when the Braves scored six times, with Freeman hitting a tiebreaking double and Ozuna following with an RBI double that chased Kershaw.

A night after the Dodgers had a record 11-run first, they managed only one hit — a solo homer by Edwin Ríos — over six innings against 22-year-old rookie right-hander Bryse Wilson in his postseason debut.

While the Braves’ outburst also lasted more than a half-hour but without as many runs as LA’s a day earlier, it was more than big enough after Ronald Acuña Jr. led off the decisive six-run sixth with an infield single on a play that ended with him, Kershaw and second baseman Kiké Hernández all on the ground. They all took tumbles because of their effort and weren’t knocked down by the sometimes bothersome breezy conditions in the new Texas ballpark with the roof open.

Kershaw fell down after coming off the mound while reaching up to try to field the high-chopper. Hernández went to the ground after grabbing the ball and making a sidearm throw then went wide while Acuña tumbled after passing the base and landed awkwardly on his left wrist that was irritated twice during the regular season. Acuña went to second base because of the errant throw after being tended to for several moments.

RELATED: Ongoing coverage of the Dodgers

After trying glasses in the field and getting eyedrops early in the game, Freeman apparently had no problems seeing when he doubled home Acuña for a 2-1 lead before Ozuna followed with another double. Reliever Brusdar Graterol got the first out before giving up three consecutive hits, including Dansby Swanson’s two-run double and Austin Riley’s RBI single. Rookie center fielder Cristian Pache capped the inning with an RBI single made it 7-1.

Freeman and Ozuna each added RBI singles in the eighth. 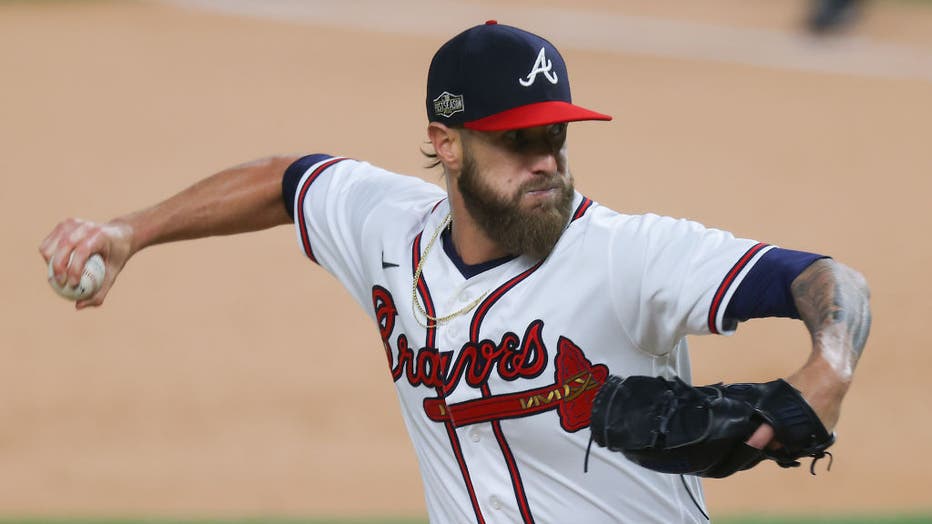 ARLINGTON, TEXAS - OCTOBER 15: Shane Greene #19 of the Atlanta Braves delivers the pitch against the Los Angeles Dodgers during the ninth inning in Game Four of the National League Championship Series at Globe Life Field on October 15, 2020 in Arling

Atlanta had gotten even 1-1 in the fourth when Ozuna turned an 86-mph slider from Kershaw into a 109-mph rocket that went 422 feet to left for his second postseason homer. Ozuna went even deeper in the seventh, a 434-foot shot to straightaway center.

Wilson became the third-youngest pitcher to allow one or no hits over at least six innings in a postseason game. The right-hander struck out five and walked one, starting with a 1-2-3 first on 10 pitches and throwing his last pitch before.

Kershaw, scratched from his scheduled start in Game 2 two days earlier because of back spasms, struck out four, walked one, and allowed four runs on seven hits in five-plus innings. The three-time NL Cy Young Award winner is now 11-12 with 4.31 ERA in the postseason, as opposed to his 175-76 record and 2.43 ERA in the regular season during his 13 years in the big leagues.

Ríos, batting seventh and the fourth left-hander in a row in the Dodgers starting lineup against Wilson, homered to right leading off the third. The ball landed on the tarp covering the first several rows of seats closest to the field, and separating fans sitting in socially distanced pods of up to four people beyond that. 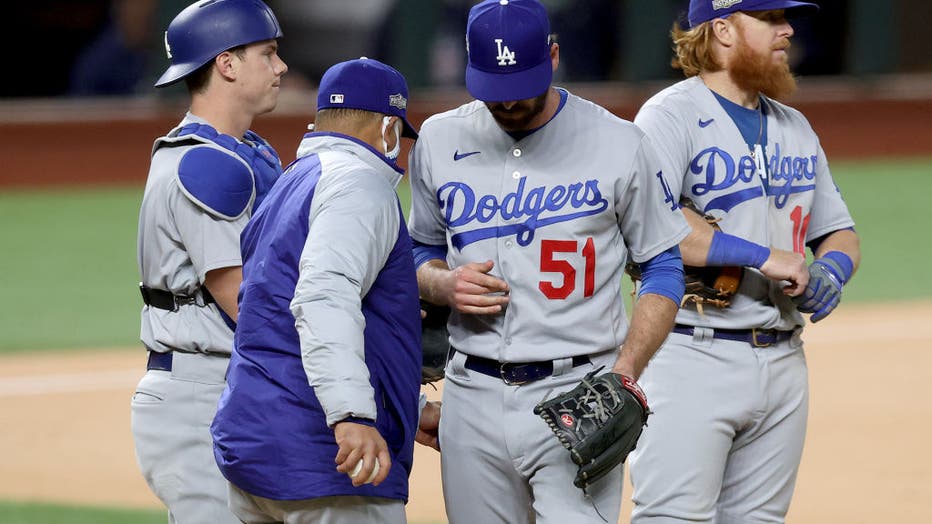 Manager Dave Roberts of the Los Angeles Dodgers takes Dylan Floro #51 out of the game against the Atlanta Braves during the eighth inning in Game Four of the National League Championship Series at Globe Life Field on October 15, 2020 in Arlington, Te

After being left off the NL Division Series roster because of a groin injury, and not playing in the NLCS opener, Ríos homered when starting the last two games. He had one of the Dodgers’ postseason record five on Wednesday night.

Major League Baseball said it wanted to keep the roof open at $1.2 billion Globe Life Field — barring rain — when the agreement was reached for the new home of the Texas Rangers to host three rounds of the playoffs in the pandemic-shortened season. Fox reported during the telecast that Dodgers manager Dave Roberts told umpire Cory Blaser between innings that Kershaw and first baseman Max Muncy were having trouble seeing. The reported wind speed at the start of the game was 6 to 15 mph. Muncy scrambled from foul ground to the infield grass and was still on the move when he caught a high infield pop from Riley to end the second inning.

Kershaw has now allowed 27 postseason homers, second-most in history behind Andy Pettitte (31). He had been tied for second-most with Verlander before Ozuna’s first blast.