ST. PETERSBURG, Fla. - A boy from Temple Terrace became an internet sensation this week for all the right reasons.

At Saturday's game against the Texas Rangers, the young Tampa Bay Rays fan made an impressive catch of a foul ball, but his generosity toward his little sister is what earned him viral fame. 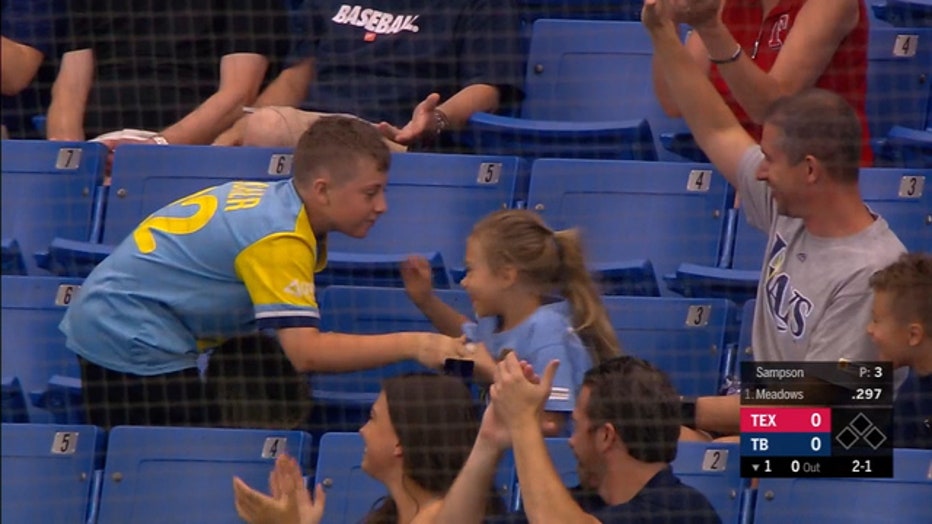 Rather than bask in the spotlight and keep the special souvenir for himself, 12-year-old Joseph Hartman ran straight to his little sister and presented her with the ball.

"My favorite position is probably shortstop but all my coaches love me at center field," Joseph Hartman said.

All of those practices, throws, and plays prepared him for his major league moment.

"I didn't really think about it. It just happened," he said.

Joseph, his father, Rob, and 7-year-old siblings Mary Grace and William headed to Tropicana Field for the Rays-Rangers game.

At the bottom of the first inning, Joseph sat ready and focused, with his glove on. That's when Rays outfielder Austin Meadows hit a foul ball.

"Immediately, I was like, 'Oh, it's coming,'" Robert said. "By the time I could get that out of my mouth, Joseph had already darted out the seat to the aisle."

"It was shot straight at me, so my instinct was just to put my glove up," Joseph said. "When it hit my glove, I was like, 'Wow, it really happened.'"

The crowd roared. But the play wasn't over. Joseph darted right back to his teammates, handing the ball to his little sister with a hug.

The Rays shared the show of sibling sportsmanship on Facebook with the caption, "Big brother of the year award. It's settled." It's been viewed more than six million times.

When asked how she felt about getting the baseball, Mary Grace smiled and said, "happy."

"We love to have our son be the one to put something positive in the world and just highlight one of those sweet moments between siblings," his mother, Karen Hartman said.

Joseph dreams this won't be the last Rays highlight. "I've always wanted to play for the Rays or just Major League Baseball in general," he said.

He's already got one major league catch under his belt.

After the catch went viral, the Tampa Bay Rays reached out to the family, offering them free tickets to this Friday's game as well as a chance to attend batting practice. We'll see if Joseph catches any more foul balls.