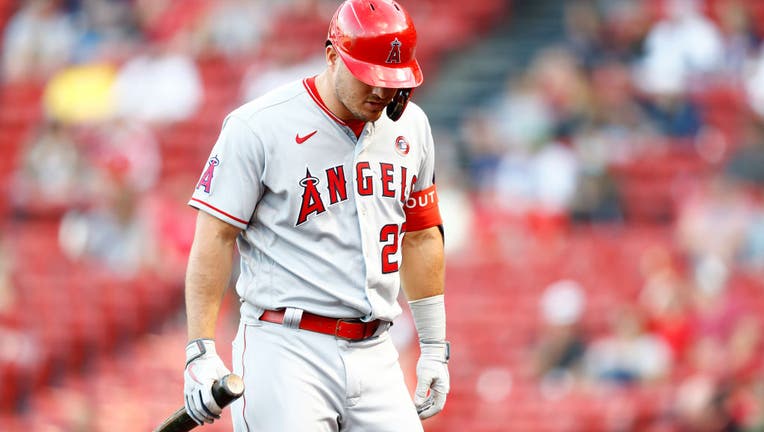 ANAHEIM, Calif. (AP) — Los Angeles Angeles outfielder Mike Trout instantly figured something was wrong. And the Angels star was right — he’s now out for the longest stretch of his major league career because of a strained right calf.

The three-time AL MVP is expected to miss six to eight weeks, which would sideline the Los Angeles outfielder through the All-Star break.

"It is not just a little bump in the road. I mean, I’m really crushed about it," Trout said Tuesday.

The Angels put Trout on the injured list, a day after he came up limping when he headed toward third base on a popup that ended the first inning. Trout said when he put his head down to run, he thought he’d been hit by a line drive.

"I knew it was bad when it happened. I felt the pop and was just hoping for the best," Trout said. "I wanted to make sure it wasn’t my Achilles. So I guess if there’s any positive that comes out of this, at least it wasn’t that. It was just a freak thing."

Trout slammed down his batting helmet as he exited the field, an injury interrupting what had been another stellar season.

Trout is leading the majors in on-base percentage (.466) and OPS (1.090) and is sixth in the American League with a .333 batting average, along with eight home runs and 18 RBIs. He missed three games earlier this season with a swollen left elbow after being hit by a pitch.

Despite being in a 1 for 17 slump when he was injured, Trout was off to the best start of his career with a .425 batting average in April.

"I’ve been around before with the loss of good players and they have come back at the right time and things worked out really well," manager Joe Maddon said.

This will be the 29-year-old Trout’s third stint on the injured list in his 11-year career. He missed 39 games in 2017 with a left thumb ligament injury and 15 games the following season due to right wrist inflammation. He was out the final 22 games in 2019 after undergoing foot surgery but was not placed on the IL due to the expanded rosters.

As for this injury, "it is something you can’t rush back because you could tear it again. I’ve got to listen to my body, and hopefully I’ll be back soon," he said.

Taylor Ward and Juan Lagares will see time in center during Trout’s absence.

The move is another tough blow for the Angels (18-22), who went into Tuesday in fourth place in the AL West, six games behind Oakland. Third baseman Anthony Rendon has had two stints on the injured list as well as catcher Max Stassi. They also cut first baseman Albert Pujols two weeks ago after there wasn’t an every day spot for him.

Los Angeles has one of the most exciting players in the game in Shohei Ohtani, who leads the majors with 13 home runs and has a 2.10 ERA in five starts. But the Halos biggest shortfall has been pitching. They are last in the majors with a 5.29 ERA.

"We have to tighten up with the pitching," Maddon said. "Regardless of who we have missing, if we go out and pitch at a high level we can take care of things. That’s where our success lies. If we pitch, we win."